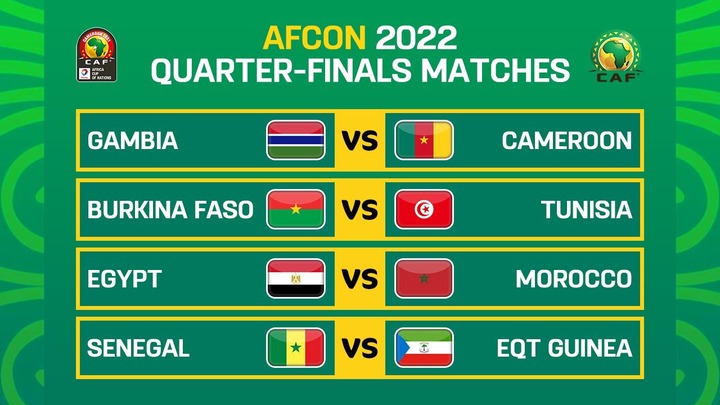 With a succession of spectacular victories, hosts Cameroon established themselves as competition favorites, most notably a 4-1 thrashing of Ethiopia in the group stage, which lit up a hitherto goal-shy tournament.

Their most valuable asset is red-hot striker Vincent Aboubakar, who has six goals in four outings at the Africa Cup of Nations and is by far the tournament's top goal scorer. Gambia's defenders will be troubled by Aboubakar's deft positioning and precision finishing.

They also benefit from playing on home soil, with Cameroonian fans generating a tumultuous environment at their team's games, scaring their opponents.

So, despite the fact that Cameroon is the overwhelming favorite, an upset is possible.

Tunisia were outside bets to win the Africa Cup of Nations after an undefeated run through the qualifying rounds, fueled by manager Mondher Kebaier's drive to take the team to the next level. However, they were defeated by Mali in their opening match, which was overshadowed by the referee's strange decision to terminate play at 89 minutes.

The Carthaginian Eagles made amends by thumping Mauritania 4-0. Gambia then defeated Tunisia, dropping them to third place. Few anticipated them to win against Nigeria, who were the only side in the group stage to win all of their matches. Tunisia, on the other hand, upset the Super Eagles with a 1-0 second-round victory, taking advantage of a Nigeria red card.

Morocco hasn't yet put in the kind of show that Cameroon and Nigeria did at times in the group stage, but they're looking like outsiders to win the Africa Cup of Nations.

The strongest indicator that Morocco is capable of playing really beautiful football was Achraf Hakimi's fearsome free-kick that gave them the advantage in their second-round match against Malawi. This comes after they finished first in a challenging group C, with victories over an unexpectedly powerful Comoros and Ghana, as well as a stalemate against Gabon.

Morocco's adversaries Egypt has a unique asset in the form of Liverpool's Mo Salah, one of the best players of his generation. However, they are lacking in star power elsewhere on the field. A thrilling penalty shoot-out win over Ivorty Coast.

The fact that Egypt has only scored two goals in four outings at the competition bodes ill for them. However, the Pharoahs' triumph over Ivory Coast, who had played some of Cameroon's most exciting football, illustrates that anything can happen.

Before the competition began, the Teranga Lions were perhaps the front-runners to win the cup. It was difficult to see how they could be stopped with Sadio Mané of Liverpool and Édouard Mendy of Chelsea, two of the most outstanding wingers in the game today.

Senegal won their group, but only by a slim margin of five points. They only won their underwhelming first encounter against Zimbabwe courtesy of a controversial penalty in the last seconds of extra time.

The 0-0 tie against an underwhelming Malawi summed up their campaign thus far, with even star players like Mané failing to shine. However, their emphatic, if bloodless, victory over Cape Verde in the second round reminded football fans of the importance of teamwork.Equatorial Guinea's opponents have no players in the same league as Mané or Mendy. They are, however, unwaveringly disciplined and well-drilled in cooperation – and they have produced results, including a group stage win over title-holders Algeria, led by Manchester City's Riyad Mahrez. While Senegal are the clear favourites, Equatorial Guinea will almost certainly continue their giant-killing trend.

Content created and supplied by: qaqamba0303 (via Opera News )