“Hugo Bross came up with a huge plan, for rebuilding Bafana Bafana again like he involved alot of young new players who are hungry to represent the country, so In my opinion I think it's time to block old players from the squad and give these young lads a chance, If Germany and England can do it why not us South Africans.”Sphiwe Tshabalala Said. 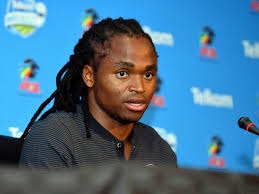 I will not say I'm happy or not happy but I'm pleased about positive results, remember Uganda had been never ever beat Bafana Bafana, So simphiwe is so early wait untill they face the really world like Algeria and Senegal.

We always win friendly games I don't remember any bafana bafana coach not doing well in friendly games let's wait.I will praise and celebrate South African wins especially Bafana cause they are our representatives, so no matter how underrated that Nation we play with and win then I'll cherish that win with pride.

Never give up till you win attitude yielded positive results for the boys, Bafana is our national team, we must support them even if they are playing against World XI.

Some people instead of being optimistic they are pessimistic, All they see is negative things nothing positive. Give the coach a chance to build the team, Just be positive once in your lives, We really need a change of attitude and have confidence on our boys.

Hugo Bross he probably prove himself yesterday winning the first Game and it was so good to see young players in the field getting opportunity to proved themselves but Hugo Bross he must add at least these three players Themba Zwane , Vincent Pule and Thembinkosi Lorch to making squad stable.

"We all know that we do win friendlies but we give credit where it's due, they played well yesterday, the question is that can they do well in the World Cup qualifiers'he added.

Percy said "seems as if we all dumbed by that win Yesterday, guy we once deafeted Spain with a better squad than what I saw yesterday but we still here as Bafana Bafana , I know this comment is baseless but with these so called trusted younger players we will suffer , remember this was not a test at all, Cape Verde or Nigeria.

"not even Tunisia , Egypt do you all think this squad will ever defeat Algeria or Senegal, Stuart Baxter squad is way far better than what I saw, this thing of young players will make us suffer" he added.