By Blessedhub (self media writer) | 24 days ago

Liverpool were beaten to a 3-3 tie by Brentford in Gameweek 6 (Day 1), as they failed to capitalize on Chelsea's and Manchester United's slip-ups against Manchester City and Aston Villa, respectively. 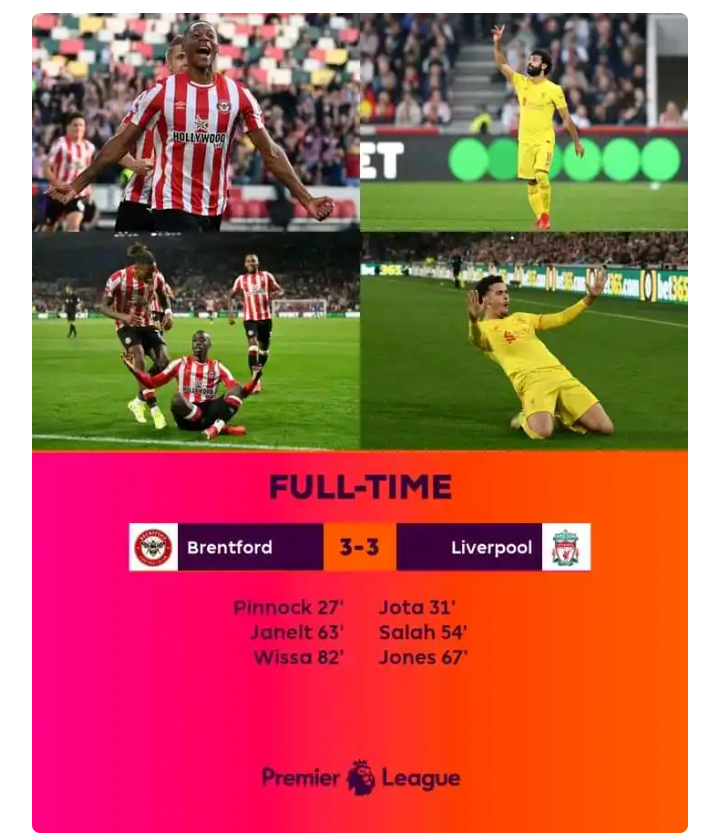 Liverpool began the encounter strongly, with Jurgen Klopp's side controlling possession, generating chances, and causing all sorts of issues for the Brentford defense.

Liverpool created the first genuine chance when Diogo Jota cut up the Bees defence with a devastating through pass that found its way to Mohammed Salah, whose effort was cleared off the line by Brentford centre-back Kristoffer Vassbakk.

Brentford should have equalized minutes later as well, following a brilliant piece of play from Ivan Toney, who headed the ball into Bryan Mbeumo's path, but he was unable to convert, with Joel Matip clearing his shot off the line to maintain the score at 0-0.

Brentford took the lead in the 27th minute following a well worked free-kick which Ethan Pinnock tucked in, with Ivan Toney credited with the assist following a fine back heel pass.

Liverpool leveled the score after Mohammed Salah played Jordan Henderson in, with the England midfielder delivering a lethal cross that was headed in by Diogo Jota to make it 1-1. Following the equaliser, Liverpool continued to press, with Curtis Jones unlucky not to put Jurgen Klopp's side ahead after his effort came off the crossbar, with David Raya parrying the rebound from Jota.

In the second half, Mohammed Salah volleyed home Liverpool's second goal of the night following a brilliant cross from Fabinho, putting the Reds ahead 2-1 against the Bees.

After Pontus Jansson's attempt struck the crossbar, Vitaly Janelt headed in the loose ball to make it 2-2.

Jurgen Klopp's team regained the lead via a fantastic long-range shot from Curtis Jones that deflected off a Jota and into the net. On 82 minutes, Liverpool surrendered their lead when Joel Matip failed to clear the ball properly. Brentford pounced, with Yoane Wissa lobbing the ball over Allison to level the score.

New Hyundai i30N | Is it possible for something to be fantastic but leave you cold?