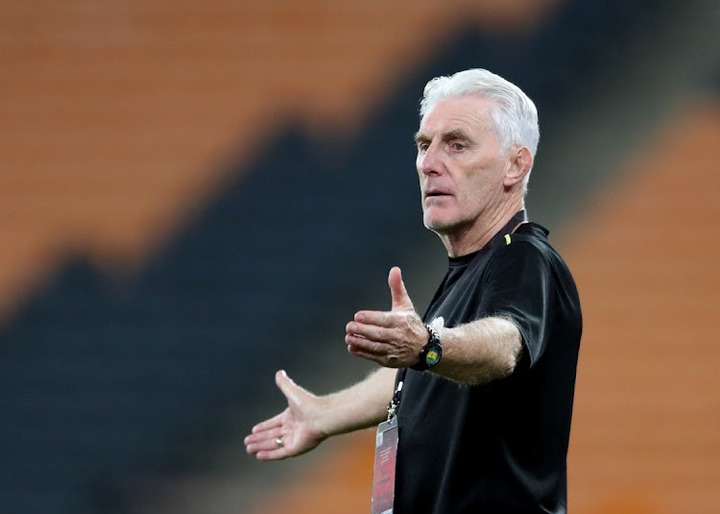 Despite their disputed elimination, Belgians are "proud.

Hugo Broos is the coach of Bafana Bafana.

Hugo Broos, the coach of Bafana Bafana, has correctly attributed their failure to Ghana's bad officiating.

Ghana defeated Bafana Bafana 1-0 to go to the World Cup qualifying play-offs as Group G winners, thanks to a questionable penalty converted by skipper Andre Ayew.

Senegalese referee Maguette Ndiaye made a series of difficult calls against Bafana, but awarding a penalty that would ultimately prove crucial, when SA defender Rushine de Reuck barely touched Ghana's Daniel Amartey inside the box, was the cherry on top.

I'm not thrilled with the way the referee allowed Ghana to play aggressively tonight [on Sunday]... I have nothing against it, but it must be in the best interests of both parties. As a result, it was tough for us to achieve strong outcomes here," Broos explained.

Despite this, the 69-year-old Belgian trainer was proud of his men. Broos said that his team's lack of experience put them at a disadvantage, but he believes they will be stronger in the 2023 Africa Cup of Nations (Afcon) qualifications.

I'm really proud of my team after seeing what we've accomplished in the last three months. I congratulate Ghana on qualifying for the next round, but I also have to applaud my squad since we put in a lot of effort," Broos said.

In South Africa, there is once again a team, which is critical. This team [Ghana] has ten times our experience. We're a new group. You can't blame us for not qualifying for the next stage, but you can bet there will be a team in South Africa again in the Afcon qualifications.

The Bafana boss also bemoaned his team's failure to score more goals in their penultimate Group G match, which was played at home against Zimbabwe two days before the journey to Ghana. SA only managed a lone goal against Zimbabwe, wasting a chance to improve their goal difference as Ghana qualified ahead of them by a goal.

That was the only game in which we didn't play at our best, which is unfortunate because if we had performed as well as we did in the other four games, we would have won by two or three goals, increasing our chances of progressing to the next round," Broos remarked.