By MissMomo (self media writer) | 3 months ago 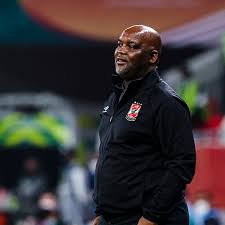 Egyptian Premier League Al Ahly head coach Pitso Mosimane is going to return to being South Africa's national soccer team, Bafana Bafana or he will go back to the PSL?

Mosimane revealed that the next team he will coach after the Egyptian Giants.

In his recent interview with New York Times, the South African-born coach Pitso Mosimane told the publication about his big plans after his tenure at Al Ahly.

Mosimane has achieved almost everything a coach can achieve and has laid the foundations for an even greater future. He led Al Ahly to back-to-back CAF Champions League titles, the Egypt Cup and consecutive CAF Super Cups.

As the former head coach of Mamelodi Sundowns, Mosimane helped the club win the CAF Champions League triumph in 2016, as well as DStv Premiership titles. But, he still has one major goal left in Africa and that is to win the FIFA Club World Cup.

Here are the plans of Pitso Mosimane after he leaves Al Ahly.

Mosimane could return to the PSL, to coach the likes of Kaizer Chiefs or Orlando Pirates or even make history as the first African coach in one of Europe's top leagues.

Returning to coach Bafana Bafana is also a very strong option but what does Mosimane have planned? According to The South African sources, Mosimane is considering going international. He has mentioned these countries, Senegal, Nigeria, Ivory Coast or remain in Egypt, in December Al Ahly was set to offer Mosimane a new contract but the meeting never took place.

Opinion - Orlando Pirates could be the undisputed kings of Soweto if they win the CAF Confed Cup?

Tanzanian Simba PUNISHED to pay R162k, for performing RITUALS before their match vs ORLANDO PIRATES