Meet This 23-Year-Old Footballer Who Is Richer Than Messi, Ronaldo

Meet A 23-year-old footballer with more money than Lionel Messi and Ronaldo. 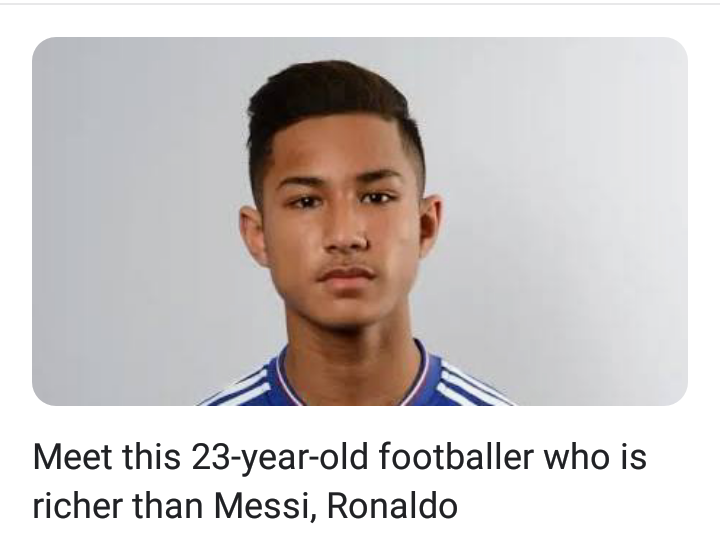 Despite the fact that Lionel Messi and Cristiano Ronaldo are world-class players, Faiq Bolkiah, 23years, has been ranked wealthier than them.

The footballer who plays for Maritimo in Portugal is one of Hassanal Bolkiah's £13 billion fortune's heirs, according to the UK Sun.

Hassanal Bolkiah is the Sultan of Brunei, an oil-rich country in Southeast Asia.

Bolkiah was born in Los Angeles and holds Bruneian and American citizenship.

He earned his education at Bradfield College in the United Kingdom.

Bolkiah has been branded "the richest footballer in the world" with a net worth of $20 billion.

Sultan Faiq of Brunei is the son of an oil magnate, Jefri Bolkiah, making him a member of the royal family and one of the wealthiest living footballers.

While still a member of A.F.C. Newbury, Bolkiah signed a one-year deal with the Southampton F.C. Academy in 2009. He remained with Southampton until December 2011.

Bolkiah signed a two-year youth contract with Chelsea in 2014.

Bolkiah competed against Corinthians, Eintracht Frankfurt, PSV Eindhoven, and a Singapore junior squad in the 2013 Lion City Cup. His contract with Chelsea was slated to end in the summer of 2016, thus he left in December 2015.

After a trial with Stoke City, he signed a three-year professional contract with Leicester City in March 2016. He also signed a one-year contract extension in the summer of 2019.

On September 23, 2020, Bolkiah signed a free transfer with Martimo of Portugal's Primeira Liga, and three months later, he made his debut with the under-23 squad in a 3–3 home draw against Sporting CP U23 after being named to the starting lineup. 45 days later, he was named as a Martimo substitute for the first time in a league match against Sporting CP.

What's your opinion about this?