By Ginks (self media writer) | 4 months ago

The Premier League champions are content with their offensive options and have no plans to invest money in the coming months.

Manchester City will not sign a successor for Ferran Torres in January, according to Pep Guardiola, who is content to wait after sealing a lucrative agreement. 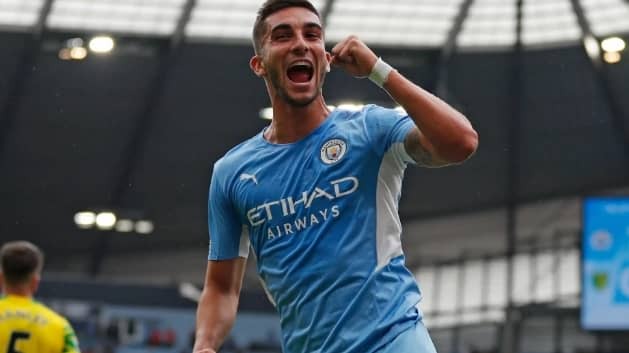 On Wednesday, GOAL was able to confirm that the Spain international forward is set to return to his homeland, with an initial deal of €55 million (£47m/$62m).

With the reigning Premier League winners already lacking a productive No 9, that move will free up squad space and finances at Etihad Stadium, but Guardiola is sure he will not be looking for attacking reinforcements in the winter.

What's been said so far?

When asked about Torres and whether he will spend again in January, Guardiola replied, "No, we're not going to bring in any striker in January."

"I can't say because Txiki [Begiristain] didn't tell me anything officially [about Torres going to Barcelona]." I know they're negotiating; all I know is that I think it's near. When the club says it's finished, but not right now. Txiki didn't contact or text me to let me know it was done."

Torres' departure is for what reason?

The highly-rated 21-year-old joined City from Valencia in the summer of 2020, and he was anticipated to flourish in England.

His debut season saw him score 13 goals in 36 appearances across all competitions, including a hat-trick in the Premier League, but the chance to play at Camp Nou was too good to pass up.

"I want happiness for my guys," Guardiola said of Torres' decision to leave. You must go if you are not satisfied. When you wish to leave, we are not like other teams where the CEO and president say no.

"Another issue is the club agreement, which isn't my concern." You must stay if the club refuses to accept the offer. That is why athletes have fantastic agents that negotiate through the media, using the weapons at their disposal to close deals. Ferran, on the other hand, is not in this situation.

"Everyone, if you want to go because you're unhappy here and believe you'll be happier somewhere, you must leave." Careers are finite; they end one day. There will be no disappointment if he decides to go. I'm delighted for him."

"I always have the notion if Barcelona and Real Madrid want a player, it's impossible to say no," the Catalan coach said of conducting business with his previous team. They are the best teams on the planet.

"He's from Spain; Barcelona is after him; he knocked on my door and said he wants to leave; I told him to leave." Txiki's agent arranges a deal after I phone him. I've heard the deal is almost done.

"I can't force or persuade players if their minds are elsewhere." Other clubs argue that it doesn't matter; I'm not making a decision. [Letting players depart] is a personal decision for me."