By Chiefs (self media writer) | 8 months ago 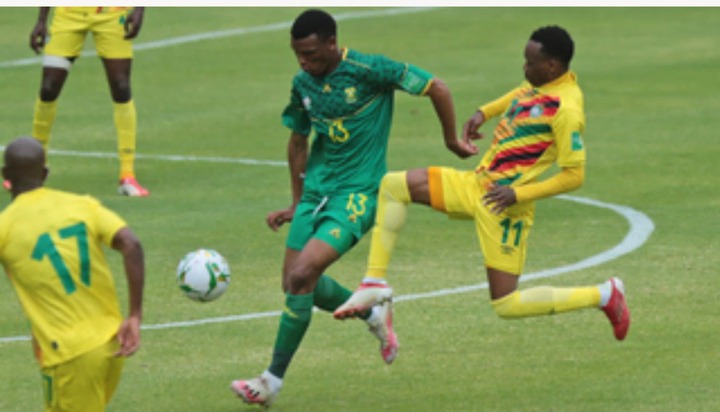 JOHANNESBURG, South Africa – Hugo Broos, the coach of Bafana Bafana, is a devotee of fancy football. However, his team's lack of scoring chances in their debut game of the 2022 Fifa World Cup qualifiers against Zimbabwe suggests that his philosophy may take some time to master.

South Africa got out to a fast start against The Warriors, ready to exploit any gaps in the defense. But it was a corner kick that gave them their first serious chance at goal, which striker Evidence Makgopa blasted over the crossbar.

Teboho Mokoena's thunderbolt was quickly deflected over the crossbar by Talbert Shumba. Bafana, on the other hand, improved as the game proceeded, and Shumba made another open-play save in the second half.

Bafana Bafana were expected to pierce Zimbabwe's defense like a hot knife through butter, with ball players like Percy Tau, Luther Singh, and Gift Links in the starting lineup. However, Tau was forced to track back due to a lack of supply from the middle.

Tau would be the best at dribbling past opponents and setting up teammates up front on another day. However, because he was not match fit, the new Al Ahly midfielder struggled with pace and his passing accuracy was poor.

Tau couldn't have been expected to handle all of the scoring responsibilities on his own. Links and Singh were meant to help him, but they weren't interested. They continued to give little to the team. Because of their lackluster performance, their midfielders had more work to do.

Mokoena and Mothobi Mvala were Bafana's best players on the park in Harare, according to Broos' post-match comments. Could it be that Bafana did not have enough supply up front because the duo was covering for their defense?

It certainly appeared to be the case, especially in the first half. The Zimbabwean strikers were proving difficult for Bafana's defense to handle. Nyiko Mobbie was used as a left back out of position, while Thapelo Morena was dynamic in attack but not so much in turnovers.

Siyanda Xulu, on the other hand, was a pillar in Bafana's defense, shielding Rushine De Reuck as he improved.

The captain, Ronwen Williams, will be pleased with the clean sheet, but he, like Broos, will see that they need to start scoring goals.

Bafana Bafana will face Ghana at the FNB Stadium on Monday, with a win essential if they are to set the tone for their qualifying ambitions. But that won't be easy, given Ghana's high confidence following their 1-0 win over Ethiopia.

The teams tied 1-1 in the Africa Cup of Nations qualifiers the previous time they met in March. Bafana Bafana were fortunate to win that point because they never came out to play and instead depended on counter-attacks.

Broos has stated that this will not be his style of play, though they may employ it on occasion. He prefers what he refers to as "fancy football." Playing against the Ayew brothers, Jordan and Andre, at The Calabash, one would expect Bafana to be motivated and at their best.

For a long time, the Ayews have been playing at the greatest level in Europe, and their considerable experience has served as a bargaining tool for Ghana. They, like our forwards, are quick, lethal, and skilled. But it doesn't mean they can't be thrown from their perch as well.

While Bafana is an ordinary team, everything they lacked against Zimbabwe, particularly in terms of scoring chances, can be remedied. Broos has stated that he is starting over with the team, so tomorrow night will be another chance to set a firm foundation.