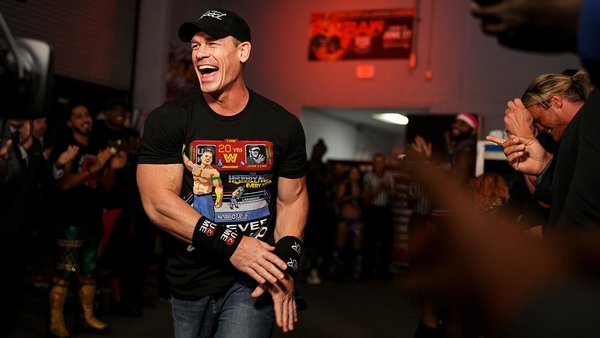 John Cena returned to WWE Raw last night, celebrating his wrestling career's 20th anniversary through a number of angles, including a showcased in-ring segment. Hyped up for weeks, it was the company legend's first televised WWE appearance since SummerSlam 2021 (30 July), where he fell to Universal Champion Roman Reigns in one of the year's biggest wrestling main events.

The 16-time World Champion was understandably received like a megastar by the live crowd. This positive response was reportedly mirrored backstage, too, with the comeback described as being "as exciting for the locker room as it is for the fans."

Though nothing was formalised, Cena's big in-ring segment saw him say that at 45 years old, he wasn't sure when he'd compete again, before responding to chants of "one more match!" by noting that when he does hit the ring again, it'll be for more than that.

Cena has been linked to a potential passing of the torch match with United States Champion Theory. This was teased in a backstage segment featuring the two wrestlers on Raw, with Theory dismissing the veteran's skills and accolades.