Guardiola and City fans left disappointed with a draw against Southampton 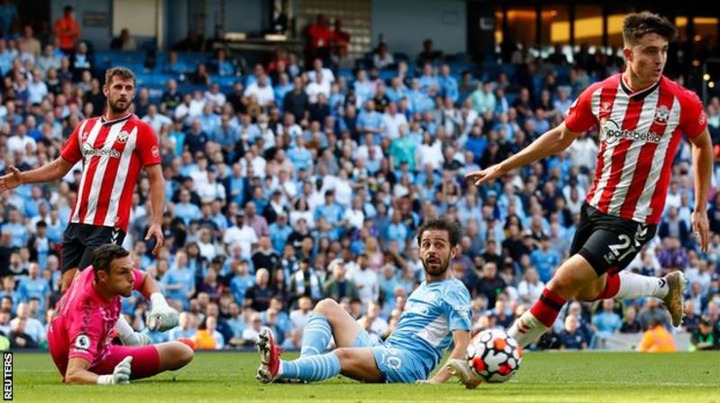 Despite the raucous support of the home supporters at Etihad Stadium, a surprisingly shot-shy Manchester City were unable to break down a staunch Southampton team and were fortunate to draw.

City were careless in possession and lacked their customary spark in attack, and Saints will feel they should have left Manchester with all three points, not just one.

The visitors were awarded a penalty on the hour mark when Kyle Walker was sent off for bundling Adam Armstrong over in the box, but both decisions were overturned when VAR intervened and referee Jon Moss watched replays of the incident.

Armstrong had burst into the box after City had again given the ball away cheaply but, despite being first to the ball he was adjudged to have fouled Walker as the City defender attempted a challenge.

That reprieve brought a raucous response from the City supporters, who had already been making themselves heard all afternoon, but they could not galvanise their side.

When Kyle Walker was sent off for bundling Adam Armstrong over in the area on the hour mark, the visitors were awarded a penalty, but both decisions were reversed when VAR intervened and referee Jon Moss watched footage of the event.

Armstrong rushed into the area after City had given the ball away cheaply for the second time, but despite being first to the ball, he was deemed to have fouled Walker as the City defender tried a challenge.

That respite elicited a vociferous response from City supporters, who had already been making their voices heard throughout the afternoon, but they were unable to rally their supporters.

When Raheem Sterling followed up after substitute Phil Foden's header was saved, City felt they had snatched victory, but he was flagged offside as he converted the loose ball, and a lengthy VAR check did not overturn the judgment.

Saints remain winless after splitting the points for the fourth time in five league games, while City now trail Liverpool by three points.

Pep Guardiola had a frustrating 90 minutes, but he can't say his team's supporters did not contribute this time.

Any assumption that Guardiola's controversial midweek statements urging more City fans to attend this game would cause a schism between him and his fans was quickly debunked. 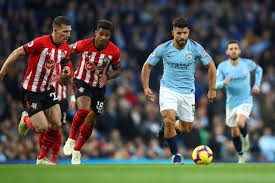 Within 70 seconds of kick-off, City fans in a near-capacity 53,500 crowd serenaded their boss, screaming "we're glad all over, we've got Guardiola" and keeping the volume up throughout.

If Guardiola's goal was to get the crowd moving right away, he succeeded - but his players appeared sluggish for extended stretches against a well-organized and hard-working Southampton team.

It wasn't even close to being one-way. Tino Livramento's frequent breaks forward along the right flank had to be avoided, and Adam Armstrong impressed both on and off the ball.