Could Big Time Becks and Notorious team up at some point in the future? 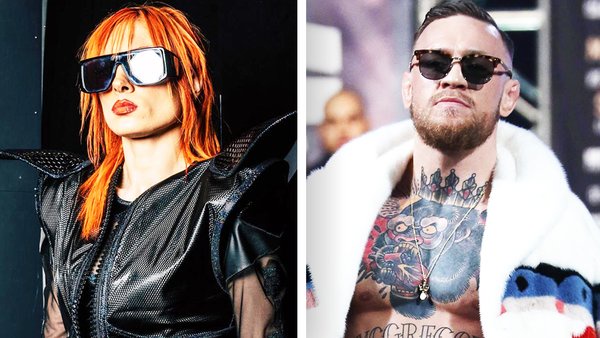 With there having been plentiful rumblings over the years of Conor McGregor entering the pro wrestling business, could we get to see Notorious team up with Becky Lynch at some point down the line? If Big Time Becks gets her way, absolutely.

Speaking during an interview with Lissy Almeida (via WrestlingNews.co), Lynch stated how she would be happy to team with Conor "any time".

"Okay, so is it me and Conor? Me and Conor versus... who are we facing? Anybody we want? Oh, all right, I'm down for that. Well, hell, I'm down to team with Conor McGregor any time.

This isn't the first time that a team-up between Lynch and McGregor has been teased, of course.

After the former UFC Featherweight Champion and UFC Lightweight Champion said he wasn't at this year's WrestleMania because WWE talents fear him, Becky reached out to extend an offer for Conor to be at 'Mania 39 in some capacity.

As alluded to, Conor McGregor has been regularly rumoured to do something in WWE for years now, with his mainstream star power and obvious legitimacy making him naturally appealing to Vince McMahon's sports entertainment juggernaut.

The Irishman wouldn't be the first UFC star to try their hand in WWE, with Ken Shamrock, Riddle, Shayna Baszler and Ronda Rousey all clear examples of MMA fighters who nicely transitioned into pro wrestling. One major stumbling block right now, though, is the sheer amount of money Conor can still make in the fighting game.

At 33 years of age, with several big fights still on the table, and with a personal net worth of $200 million, McGregor is likely in no rush to step away from the cage just yet. Even though he's lost four of his last seven fights, Conor still made a whopping $23 million for his last outing against Dustin Poirier at UFC 264 last July.

Considering WWE's top earner - that being Brock Lesnar - makes $15 million in a calendar year, that's the sort of money Conor McGregor is still able to make in one single night. Given his age though, there's still plenty of time for Conor to turn his attention to pro wrestling once his fighting days are over. Then again, the UFC icon has previously earmarked his plans to be a billionaire by the time he hits 35...