By Love_lee (self media writer) | 3 months ago

Zhan Beleniuk, 30 year old Ukrainian wrestler clinched the countries only gold medal at the 2020 Tokyo Olympics. The celebrations would be short lived unfortunately as he would be racially abused in the streets of his home country upon his return.

Beleniuk, born to a Rwandan father and Ukrainian mother recalls racial abuse from a very young age. Although many of his fellow country men including the Ukrainian president Volodymyr Zelenskiy congratulated the sportsman and member of parliament for the Servant of the people party, it seems not everyone welcomes his achievements based on his skin color.

The incident left the gold medalist with the questions ' if I am a Ukrainian for my state, what criteria of patriotism exists in it?!' He posted, adding ' how can an Olympic champion feel safe in his homeland and in his hometown?!'

Although the actions were unfortunate and undeserved. Many citizens showed him support. A sportsman of such calibre should not have his shine dimmed because of his skin color. He worked hard and was fittingly rewarded.

President Zelenskiy did call for police to respond to cases of racism and xenophobia harshly and to stop them at all cost. Police have launched an investigation into the incident.

Oleksandr Pastukhov, the spokesman for the Ukrainian federation of Greco-Roman and sports wrestling described Beleniuk as a hero and the incident as a provocation.

Speaking by phone, he described the incident as sad and unpleasant. He added that " Beleniuk has proven to be a patriot, a real Ukrainian.

Beleniuk won a silver medal at the 2016 Rio Olympics and the gold from the Greco-Roman middle weight wrestling final where he beat Viktor Lorincz at the 2020 Tokyo Olympics. 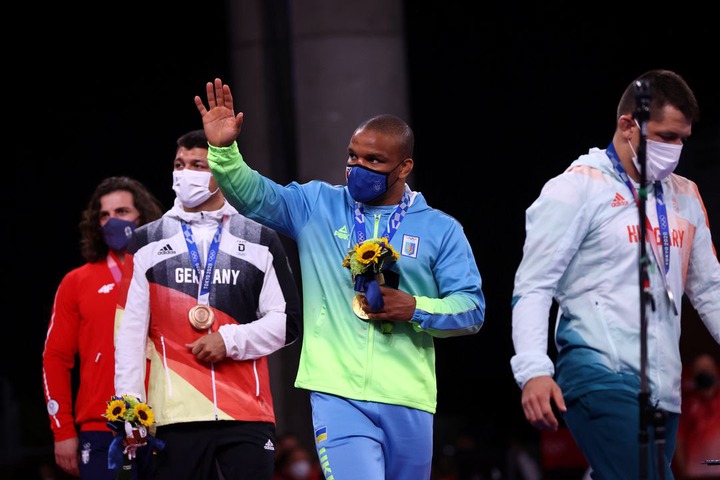 Content created and supplied by: Love_lee (via Opera News )