By Swain (self media writer) | 2 months ago 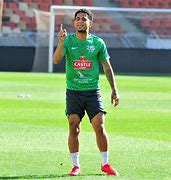 Bafana Bafana are scheduled to host Zimbabwe tonight for the international match.

Keagan Dolly, who was a prominent component of Bafana Bafana in the pre-Hugo Broos period, has explained the differences between the current national team roster and prior squads. Dolly is at his first national team camp under Broos, preparing for the final two Group G World Cup qualifiers, at home and away, against Zimbabwe and Ghana. At FNB Stadium, Bafana Bafana will face Zimbabwe (9pm).

Dolly, who has 19 Bafana Bafana caps under four different managers – Owen da Gama, Shakes Mashaba, Stuart Baxter, and Molefi Ntseki – believes the difference between the former and current Bafana squads is that the latter does not disparage opponents before matches.

"When we go to each game, we should keep in mind that there is no such thing as an easy game." One of our previous issues was that we undervalued teams. Teams like Cape Verde and So Tomé and Prncipe put us through their paces because we convinced ourselves they were pushovers," Dolly explained.

"In every game they've played so far, the current team has displayed a positive attitude. The difference between the previous squad and the present one, I believe, is mindset."

This season, the youngster from Westbury in Johannesburg has five goals and four assists in 11 games for Amakhosi in the MTN8 and league. Dolly has returned to Bafana because of his remarkable numbers. Coach Broos has received accolades from Dolly for instilling in his players the belief that they can achieve greater heights.

"He [Broos] instills confidence in players, which is exactly what our country requires." Coach Broos is the best person to help us qualify for all of these important events," Dolly remarked.

Content created and supplied by: Swain (via Opera News )

Celebrities you did not know are from Lesotho