Brazilian hero Garrincha who scored most goals in World Cups

By Mohamed_Salah✔ (self media writer) | 11 months ago 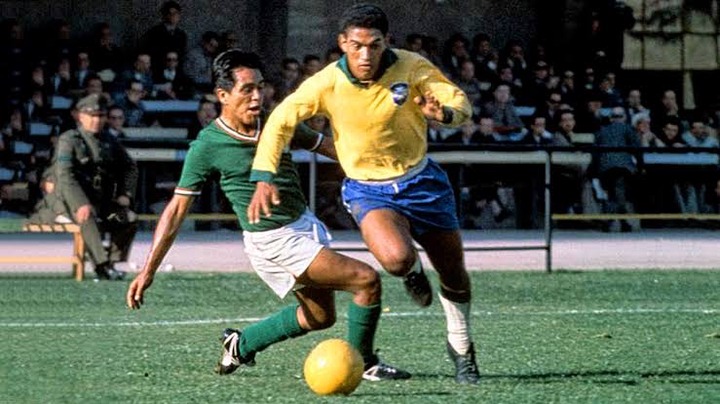 Manuel Francisco dos Santos (28 October 1933 – 20 January 1983), nicknamed Mané Garrincha, best known as simply Garrincha was a Brazilian professional footballer who played as a right winger. He is widely regarded as one of the greatest players of all time, and by some, the greatest dribbler ever. Garrincha is extremely popular in Brazil, where older fans considered him to be better than Pelé.

Garrincha played a vital role in Brazil's 1958 and 1962 World Cup victories. In 1962, when Pelé got injured, Garrincha led Brazil to a World Cup victory with a dominating performance throughout the tournament. He also became the first player to win Golden Ball (Player of the tournament), Golden Boot (Leading Goalscorer) and the World Cup in the same tournament. He was also named in the World Cup All-Star Team's of both 1958 World Cup and 1962 World Cup. In 1994, he was named in the FIFA World Cup All-Time Team. Brazil never lost a match while fielding both Garrincha and Pelé. In 1999, he came seventh in the FIFA Player of the Century grand jury vote. He is a member of the World Team of the 20th Century, and was inducted into the Brazilian Football Hall of Fame. Due to his immense popularity in Brazil, he was also called Alegria do Povo (People's Joy) and Anjo de Pernas Tortas (Bent-Legged Angel).

At club level, Garrincha played the majority of his professional career for the Brazilian team Botafogo. In the Maracanã Stadium, the home team room is known as "Garrincha". In the capital Brasília, the Estádio Nacional Mané Garrincha is named after him. He is credited for inspiring the first bullfighting chants of olé to be used at football grounds. 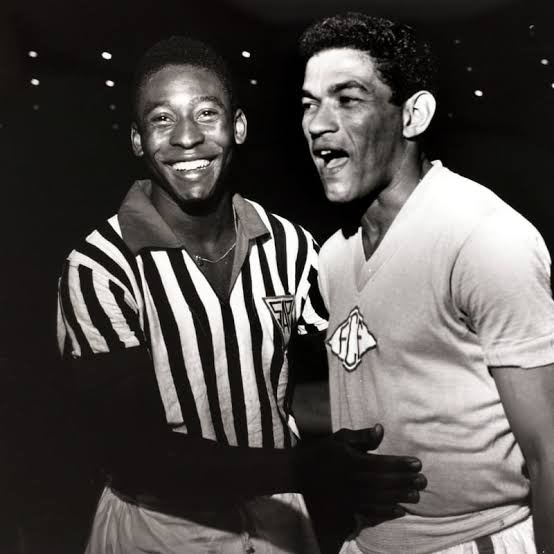 Garrincha is renowned for his remarkable ball control, imagination, dribbling skills and feints on the wing, as well as his ability to create chances out of nothing. He also possessed a powerful shot with either foot and was a gifted set piece specialist known for free kicks and corners taken with the outside of his foot. However, it was his dribbling skills he was most famous for, a skill he retained throughout his career. Regarding Garrincha's dribbling ability, football writer Scott Murray remarked when writing for The Guardian in 2010: "...the bottom line is uncontestable: Garrincha was the greatest dribbler ever."

Adored by the Brazilian public due to his innocence, carefree attitude and ability to entertain in making fools of opposing players, Garrincha was referred to as; "Joy of the People". Djalma Santos, his Brazil teammate, stated; "He had a childish spirit. Garrincha was football's answer to Charlie Chaplin."

Examples of his shooting ability are his goals in World Cups against England in 1962 and Bulgaria in 1966. He was also able to turn on himself at top speed and explode at unusual angles, which he used to great effect. The numerous attacks and goal opportunities he generated through individual plays would often end up in an accurate pass to a teammate in a position to score. This occurred in the first two of Brazil's goals in the 1958 World Cup final and the second goal against Spain in the 1962 tournament. He was also an excellent header of the ball despite his relatively short stature. He is one of a few players to have scored direct from a corner, a feat he managed to do 4 times in his career.

Regarded as one of the greatest players of all time, he was voted into the World Team of the 20th Century by 250 of the world's most respected football writers and journalists, came seventh in the FIFA Player of the Century grand jury vote, and was named in the FIFA World Cup All-Time Team. 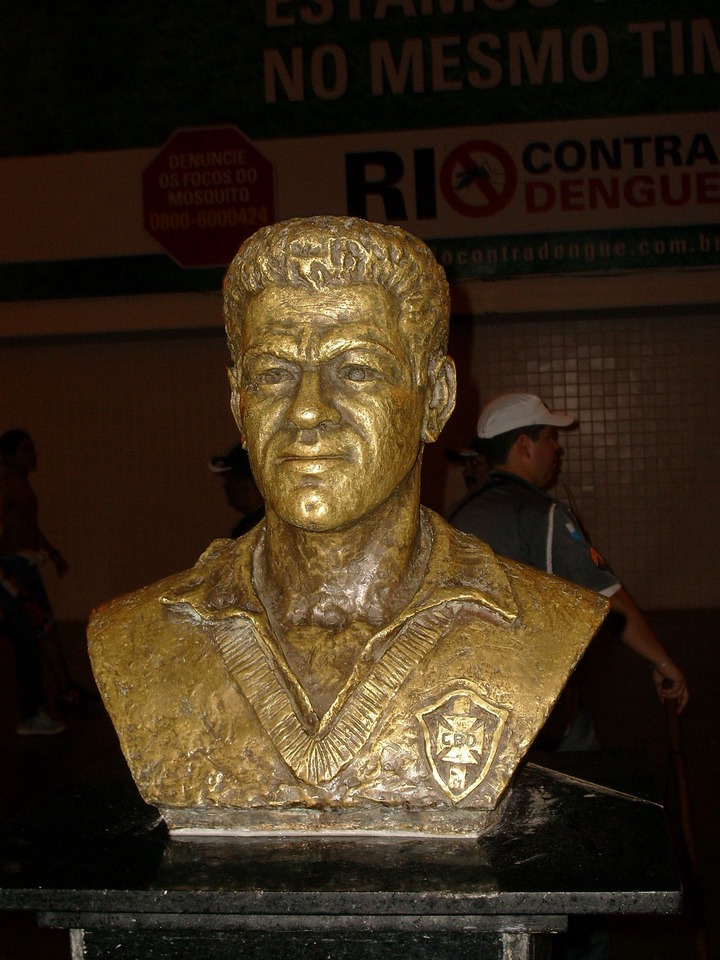 The success Garrincha enjoyed on the football pitch was in stark contrast to his personal life. He drank heavily throughout his adult life and was involved in several serious road accidents, notably a crash into a lorry in April 1969 which killed his mother-in-law. He was married twice, first to Nair Marques in 1952 (they separated in 1965), a factory worker from Pau Grande with whom he had eight daughters, and second to Elza Soares, a samba singer whom he married in an unofficial ceremony in March 1966. Soares had also been married previously, and the marriage saw Garrincha cast as a villain by the same press that had once feted him. The couple separated in 1977, when Soares left him after he struck her during an argument. Garrincha had other significant affairs, including one with showgirl Angelita Martinez, and he is known to have fathered at least 14 children.

After a series of financial and marital problems, Garrincha died of cirrhosis of the liver on January 20, 1983, in an alcoholic coma in Rio de Janeiro. He had been hospitalized eight times in the previous year, and by the time of his death he was a physical and mental wreck. His last years were unhappy and obscure – he seemed to have become a forgotten hero – but his funeral procession, from the Maracanã to Pau Grande, drew millions of fans, friends and former players to pay their respects. His epitaph reads "Here rests in peace the one who was the Joy of the People – Mané Garrincha." People had painted on the wall: Obrigado, Garrincha, por você ter vivido (Thank you, Garrincha, for having lived).

A multi-use stadium in Brasilia, Estádio Mané Garrincha, is named after him. His career was presented in the 1962 film Garrincha, Alegria do Povo and in 2003, another movie, called Garrincha – Estrela Solitária ("Lonely Star"), based on Ruy Castro's book, depicted his life on and off the field. 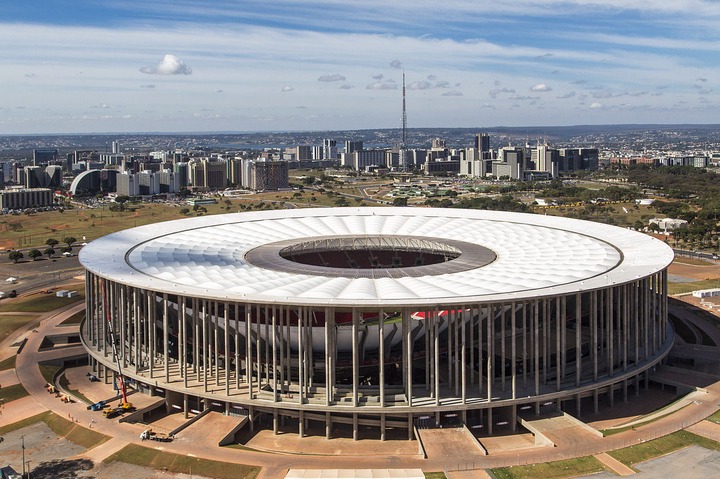