Pretoria Side Only GladAfrica Team Still In Nedbank Cup

Pretoria Callies progressed to the elimination round of the Nedbank Cup after a 5-4 emotional punishment shoot-out triumph over Cape Town All Stars at Danie Craven Stadium yesterday.

The two groups couldn't be isolated following 120 minutes brought about a 2-2 draw, it required a punishment shootout to choose the champ.

This is a decent accomplishment for the Pretoria side in their first season in the GladAfrica Championship to arrive at this phase of the opposition.

Mentor Sammy Troughton said a week ago that his side was ravenous to arrive at the elimination round of this opposition and was satisfied after his players didn't baffle.

Callies are currently the leftover group from the GladAfrica Championship in the opposition and are one match away from the last.

The two groups came into this match on the rear of various outcomes. All Stars crushed JDR Stars 2-1 away, while Callies lost 2-3 to Royal AM allied matches.

Callies goalkeeper Itumeleng Lesu was called to make twofold saves to deny the home side in the 6th moment.

All Stars at last discovered their advancement when striker Waseem Isaacs got a through ball from Colin Ryan and adjusted approaching Lesu to space into an unfilled net soon after the half-hour mark.

It was a merited lead for the home side as they made the better of possibilities. Callies' most obvious opportunity with regards to the match came five minutes before the span after Atusaye Nyondo's free header was tipped for a corner kick by All Stars guardian Kyle Peters.

In spite of the mistake he made, which brought about an objective, Lesu kept Callies in the game by making great recoveries to deny All Stars the second and went to the stretch following by 1-0. All Stars proceeded with their mastery in the second half as they hoped to expand their lead however neglected to change over them.

Contrary to the rules, Callies leveled through Pogiso Mahlangu, who headed home from Pule Motsetse's cross nine minutes after the hour mark with their first possibility in the subsequent half.

Be that as it may, All Stars reestablished their lead two minutes after the fact from Pule Maraisane, who headed home Ronaldo Maarman's free kick.

All Stars hoped to have done what's needed for triumph, however Callies leveled again with two minutes staying through Edwin Sitayitayi to send the match to additional time.

Callies were decreased to 10 men in injury time after Aupa Moeketsi was shown a straight red for a foul. 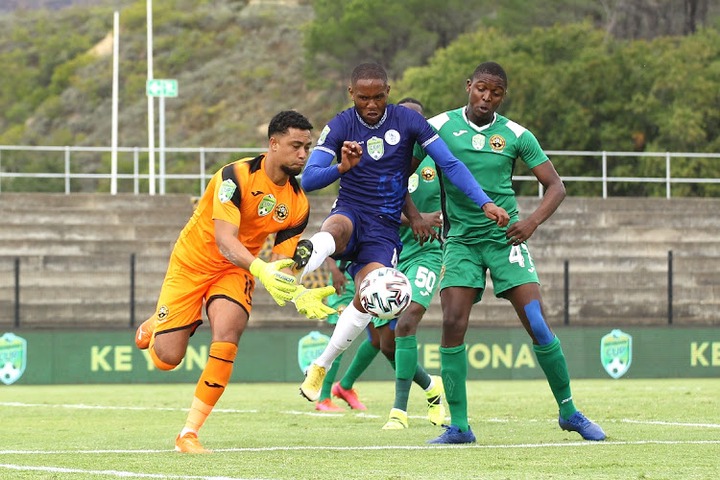