Kylian Mbappe has clarified why he and Lionel Messi traded punishments as Paris Saint-Germain left 3-2 victors over RB Leipzig in the UEFA Champions League on Tuesday night. 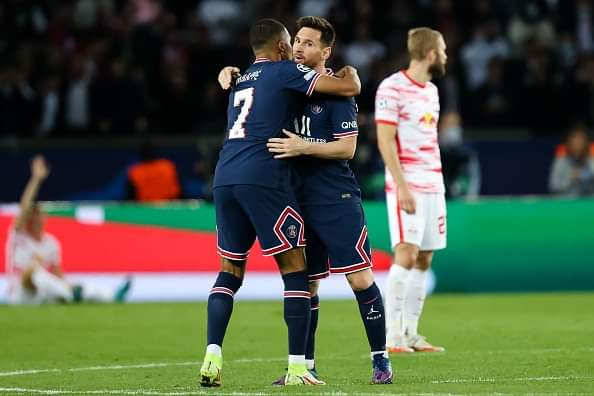 The France star opened the scoring at the Parc Des Princes in the 10th moment politeness of a fast counter-assault that started at the edge of the house side's container.

The German outfit balanced in the 28th minute through Andre Silva, with the game going into half-time in a stalemate. Leipzig then, at that point, started to lead the pack after only 10 minutes following the restart, yet Messi scored a leveler in the 67th minute

Seemingly the most prominent occurrence of the night came when Mbappe won a punishment for his side and gave it to Messi to take, with the Argentine committing no error in changing over it.

PSG were subsequently granted another spot-kick in added time, and the previous FC Barcelona charm chose to allow Mbappe to take it this time, in spite of getting an opportunity to score his first full go-around for the French goliaths. Nonetheless, the Frenchman missed the objective totally from the spot.

After the match, Mbappe uncovered the thinking behind their startling sharing of punishments.

"[On the penalties] It's typical [that I let Messi take the first], it's with regards to regard," the PSG No. 7 told Canal+.

"He's the best player on the planet, it's an advantage that he plays with us, I've generally said it.

"In case there's a punishment, he's the one that takes it, full stop. On the subsequent one, he told me 'Take it', it was toward the end, he gave it to me and I took it."

After three matches played, PSG are top of Group A with seven focuses, while Manchester City stay in second with six focuses.

Find Out What To Do If You Are Experiencing Persistent Temptation

Reports: Thembinkosi Lorch will not be getting back to the club anytime sooner

Prayer: Dear Father, Please Deliver Me From All The Battles That Are Greater Than Me