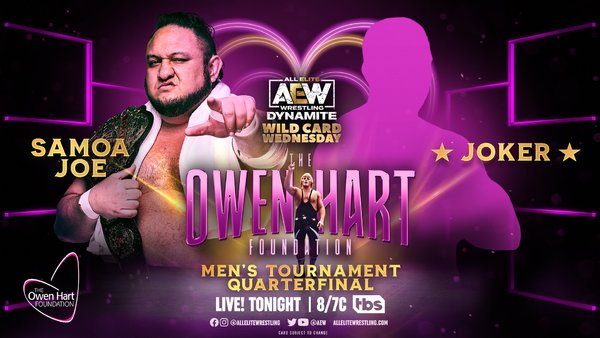 Fans did not have to wait very long to learn who the joker in the men's Owen Hart Foundation Tournament was: Johnny Nitro! No, Johnny Impact! Wrong, John Morrison!

Getting close, but it was Johnny Elite who emerged to challenge Samoa Joe in the quarterfinal matchup of the tournament Wednesday night to open Dynamite. Elite, released from WWE in November, had competed in AAA and GCW since his 90-day no-compete clause expired in February, but this was his first appearance in an AEW ring.

Johnny battled Joe in their first singles meeting, trading strikes and fighting for control for much of their match. The two veterans launched quite a bit of offense at each other, with Elite hitting a lot of his trademark acrobatic moves to keep Joe off-balance.

In the end, it was Joe nailing the Muscle Buster and picking up the win to advance in the tournament. He'll face Kyle O'Reilly -- who also advanced Wednesday by defeating Rey Fenix -- in the semifinals.

Afterwards, Jay Lethal, Sonjay Dutt and Satnam Singh hit the ring to attack Samoa Joe and even get a couple of shots in on Johnny Elite. Thankfully, the Best Friends hit the ring with steel chairs to chase them off.