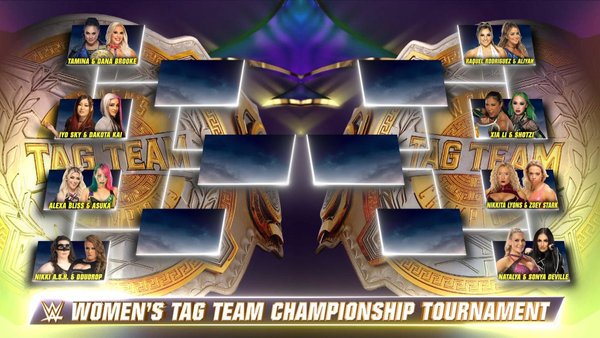 WWE revealed the bracket for its revived Women's Tag Team Championship Tournament on Monday, kickstarting the process of crowning new holders of the vacant belts.

The full bracket, as announced at the time, can be seen above. One update is necessary, however. Last night's Raw brought IYO SKY and Dakota Kai's victory over Tamina and Dana Brooke, setting them up for a second-round encounter with either Alexa Bliss and Asuka or Nikki A.S.H. and Doudrop.

Given that SKY and Kai are currently feuding with Bliss and Asuka and spoke of facing them in the tournament on Raw last night, it's likely that Doudrop and A.S.H. will be overcome.

As expected, the bracket features multiple thrown-together tandems in Xia Li and Shotzi, Raquel Rodriguez and Aliyah, Natalya and Sonya Deville, and NXT duo Nikkita Lyons and Zoey Stark. Such is life in the shallow WWE women's tag division, where lasting alliances aren't really a thing.

WWE's Women's Tag Team Championships have been vacant since May, when Sasha Banks and Naomi were stripped of the gold the same week they walked out of a Raw taping, leaving their straps on the since-departed John Laurinaitis' desk. Banks and Naomi's WWE returns have been speculated heavily following Vince McMahon's deposal as Chairman and CEO and Triple H's rise to head of creative.