By GeeDA (self media writer) | 3 months ago

Barcelona extended their fantastic record by defeating Napoli 4-2 in the UEFA Europa League last 16 round of the 2021/22 season. The Catalans advanced with a 5-3 aggregate score with to goals from Jordi Alba, Frankie De Jong, Gerard Pique, and Pierre Emerick Aubameyang.

Xavi Hernández's team is currently one of the most in-form in Europe. They've gone six games without losing in all competitions, winning four and drawing only twice during that time. 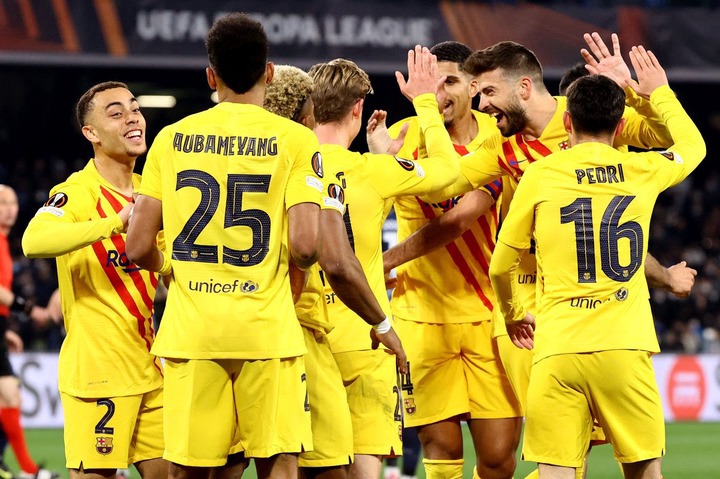 Since coming to the Camp Nou on loan from Wolverhampton Wanderers, he has been a revelation. Despite the fact that he is yet to open his account, the Spaniard has already contributed four assists in his first five games for the club.

The former Arsenal striker struggled to find the back of the net in his first three games for Barcelona. He scored four goals in his previous two outings, including a hattrick against Valencia at the weekend.

As usual, the Spanish defender has been outstanding for Barcelona this season, contributing match-winning performances from his left-back position. Alba has a goal and six assists in La Liga alone this season, and his goal against was his first in Europe.

Xavi Hernández will have to make sure that his medical staff does all possible to keep these players fit for the rest of the season, as they will be crucial to Barcelona's success.

Content created and supplied by: GeeDA (via Opera News )