What Sundowns coach said about his players & the tactics switched in the 2nd half.

What the Sundowns manager said about his players and his tactics changed in the second half. 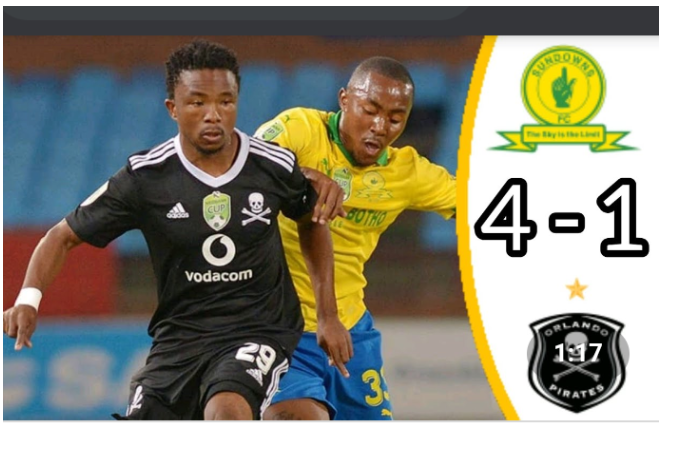 Mokwena praises the players and Komphela.

Mamelodi Sundowns co-coach Rulani Mokwena praised his players for being able to switch tactics in the second half when they beat Orlando Pirates 41 on Friday night, praising Steve Komphela's behind-the-scenes work.

Sundowns were up four before the Pirates scored a consolation goal in injury time.

He also praised Steve Komphela's work on the team's set pieces, as three of their goals came from dead ball situations.

"Ja, congratulations to the Pirates on the start," Mokwena told SuperSport after the game.

“It was clear that they were working a lot on their projects. They gave us a good squeeze in the first two minutes and built really well with the only ball that went through Ben and our midfielder was a bit too far away.

"And that was the first time that they made this build-up because we watch their games and don't normally compare ourselves to central midfielders, but we noticed it, we worked on it a bit and their structure Also gave us a few issues because they sound a bit awkward, and they feel comfortable doing it, because they play like that everyday.

"It was better for us when we forced them to stretch. And then we could only deal with that. of the two who engage the attacker. But when they play, there is a crooked four, then the pressing becomes like a rondo, so we struggled a bit.

“But in the second half we changed things a bit.We pushed our full rears a little higher so that we could pull their full rears off and because we could, so that we could overload the middle halves a bit and the players did a very, very good tactic of accommodating the instructions of half-time...

“We have only very, very good players who listen and who can be coached, who are humble and you can see it even if you look at who scored the goals. Pavol scored, we were a bit unfair with him in the previous match, we took him. But no sulking, no attitude, come back and take a chance and get the job done.

“But I also have a spare credit, one for Steve Komphela, because he worked very, very hard on the set pieces. Every time we do the technical work, Steve takes the players and they do a little more set pieces, and it was great to see that we scored all three goals, so that's a huge one, huge, huge credit to him and manager Steve. the job they did on set pieces.