The Anglo-Ghanaian forward pounced on a Saints stopper error by Alex McCarthy to poke home from close range, chasing down the keeper's attempted clearance.

It was a miserable moment for McCarthy but it was a moment to further highlight the burgeoning talent of Nketiah as he showed genuine hunger and tenacity to pursue a lost cause and put pressure on the keeper.It has also extended his fine goalscoring run this season, with the forward showing an admirable consistency ahead of goal.

That was only his eleventh start of the season in all competitions, but he has netted six goals through those games, with four of those goals coming for Arsenal, and two coming for Leeds United.During the first half of the campaign the young attacker was on loan at Marcelo Bielsa's Leeds but was recalled by Mikel Arteta having caught the eye in the championship on several occasions.

Nonetheless, Bielsa has rarely used him as a starter, with 15 of Nketiah 's 17 appearances coming from the bench in the second tier.

The 21-year-old started in their first match back after the restart for the Gunners against Manchester City, looking sharp despite the one-sided contest and a 3-0 win for Pep Guardiola 's side.He was introduced from the bench on the weekend when Arsenal was defeated by Brighton & Hove Albion and in the midweek trip to St Mary 's Stadium he was preferred to Pierre-Emerick Aubameyang.

Nketiah 's goal against Southampton was his third of the calendar year, with some Gunners supporters cheekily noting that since the start of 2020 he's scored more than Harry Kane and Tammy Abraham combined.The youngster has also scored for Arsenal this term away from home against Bournemouth, Portsmouth and Southampton, a return that overshadows Alexandre Lacazette's goal count away from the Emirates Stadium.

Despite being all season at the club, France International has scored only twice from home since campaign start.

Lewisham-born Nketiah has represented England from level U18 to level U21, but is eligible through his ancestry to represent the Black Stars of Ghana.I could smell the uncertainty – Arsenal ace Nketiah in the Southampton opener reveals instinct key.The 21-year-old forward has been presented with an straightforward goal from a situation he had hundreds of times before

Arsenal striker Eddie Nketiah was thrilled his gamble to close down Southampton goalkeeper Alex McCarthy led to the opening goal of his side's 2-0 win, with the young forward claiming he could "smell the uncertainty" from the Saints No.1.

Midway through the first half, McCarthy ran a routine back pass but gave possession to the Arsenal man under pressure from Nketiah, who had a simple job of putting the ball in the net afterwards.

In a tight fixture, it proved to be a key moment, with the Gunners not kicking clear until the closing stages, when Joe Willock pointed Nevertheless, Nketiah 's goal was inevitably the big talk point of the game and the 21-year-old was delighted that his industry was rewarded.

"I could smell a bit of the goalkeeper's uncertainty – I followed it in, I did that a hundred times so it's nice to have one of those goals," he said to Sky Sports.

"We 're working a lot on our high-press and I think we've done it well today, so I'm trying to give it to the team for me personally."

Although for Mikel Arteta 's side Saints made it tough, victory was critical to get back on track after successive defeats to Manchester City and Brighton.Three points were very significant, "Nketiah said. "In the first game, and the last game, I think we were unlucky, the results did not go our way.

"We knew that we needed to roll up our sleeves and really fight for the three points and hopefully we will build on that and continue to move forward.

""They came out really strong in the second half and I thought all the boys were battling and working hard. It's very hard to keep going in the heat but I guess that's what we did.Luckily we managed to wrap it up and add a bit of glitter to the scoreline at the end.

Victory raises the Gunners on 43 points to ninth in the table, with seven matches remaining for the season.

They will step up at least one spot if they surpass eighth-placed Sheffield United on Sunday.The Gunners seem to be in dire straits, and it will be up to young people to play a major role in the reconstruction of the club.

Two Arsenal games after the restart of the Premier League and the situation for Mikel Arteta looks rather bleak.

Before the lockout, results indicated they had put their hat in the ring for a spot in the Champions League, a circumstance that seemed inconceivable when Arteta replaced Unai Emery in Dec.

Defeats by Manchester City and Brighton & Hove Albion, however, have now seen the Gunners fall 11 points behind Chelsea and nine Manchester United and Wolverhampton Wanderers adrift.Those twin defeats, 3-0 at the Etihad Stadium and 2-1 at the Amex Stadium, may not have been questioned harshly under normal circumstances, but the manner of both losses was completely unacceptable.

David Luiz 's half-hour of madness cost the North London club costly in their hand-winning game against City, thus struggling to hang on to a second-half lead against a Seagulls side that was pre-Saturday winless by 2020. One player who has impressed in the opening exchanges is Eddie Nketiah, who surprisingly led the attack when Alexander Lacazette would have been observers’ favourite to start in Manchester.

In a game devoid of any outstanding positives for the away side, as was the same at Brighton at the weekend, the 21-year-old frontman gave as good as he got until his substitution in the 67th minute.

Given the Gunners didn’t offer much in the way of attempts at the City goal (they could only muster three all night), it’s impossible to judge the youngster on his prowess in front of goal, for that game at least.

The England U-21 international got one of the visitors’ trio of attempts as he barely got a whiff of finding the back of the net, not to mention touch the ball inside the outgoing champions’ penalty area.

Still, with four of six ground duels won on the night, the talented striker sacrificed enough in and out of possession and showed he can thrive outside doing only the fancy stuff on the pitch. Only Kieran Tierney (won five duels) was more successful in his individual tussles out of Arsenal's players, and he played for the entirety of the match. 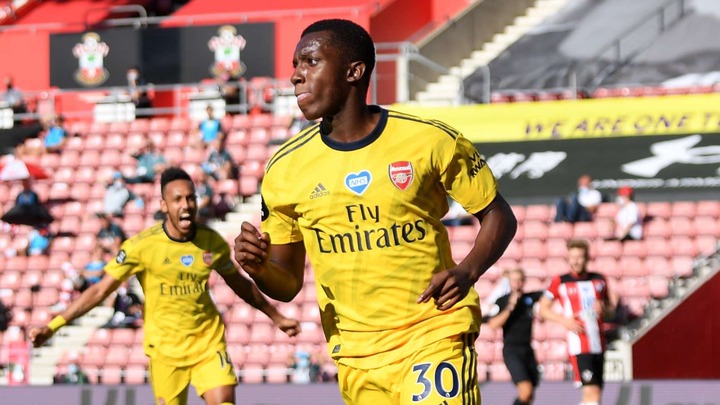 Content created and supplied by: vincente373 (via Opera News )