The Story Of How Barca Humiliated Real Madrid In 2010, After Ronaldo Had Challenged Them Publicly 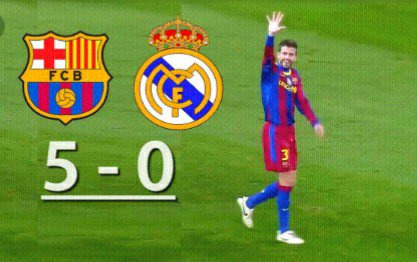 One of the greatest rivalries in football, Barcelona against Real Madrid, would continue to be one of the best. The El Clasico, as it is affectionately known, has never failed to live up to its moniker. In the year 2010, Barcelona humiliated Real Madrid, which was coached by Jose Mourinho, in the El Clasico. Following a news conference in which Cristiano Ronaldo publicly challenged Barcelona, the incident occurred. Continue reading to find out how it all came to be.

Barça defeated relegation-threatened Almeria on November 20, 2010, in a La Liga match that finished up with a final score of 0-8 in Barcelona's favor, with three goals by Lionel Messi. Barcelona's next matchup was against Real Madrid, which at the time was sitting atop the La Liga standings and in first place. Barcelona conducted a news conference before the match in which Cristiano Ronaldo publicly challenged them to score at least half of the goals they had scored against Almeria in the previous encounter.

His response to the reporter's question was, "Barca has beaten Almeria 0-8, how do you feel about that?" "Let's see if they can score half as many goals against us as they did against us," Ronaldo responded. Barcelona trounced Real Madrid by a score of 5-0 on November 29, 2010, a result that was most likely not appreciated by Pep Guardiola and his teammates.

In the opening ten minutes of the game, Xavi converted Iniesta's deflected shot, giving Barcelona the lead for the first time. Pedro scored his second goal in the 18th minute with the assistance of David Villa. In the second half, Lionel Messi and David Villa combined twice more to score the third and fourth goals, respectively. Jeffren Suarez scored the fifth goal of the game in the 91st minute, just as everyone thought the game was done.

Sergio Ramos was shown a red card in the 93rd minute for a harsh tackle on Lionel Messi, but that wasn't the end of the story.

In the match, Mourinho was defeated 5-0 for the first time in his tenure as a manager. It was also Pep's fifth consecutive El Clasico victory. Please let me know what you think about this by leaving a comment below.