'I was washing gutters for 20 Naira,' recalls Napoli's Osimhen on his meteoric climb to fame. 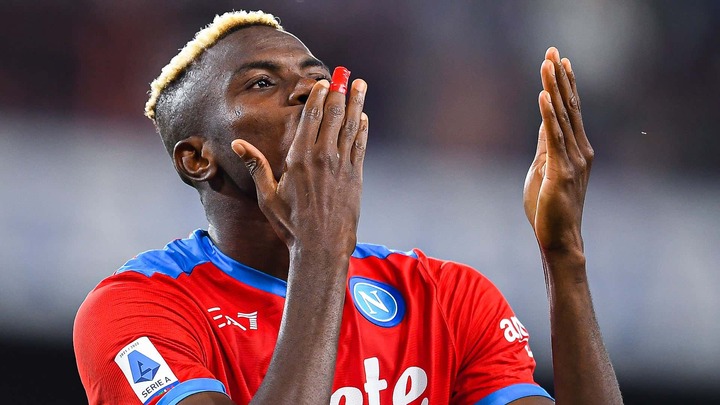 The 22-year-old Super Eagle reveals how he progressed from lowly professions to becoming a professional footballer in Europe.

Victor Osimhen, a Nigerian international, has described how he battled to make ends meet before becoming a professional footballer.

The 22-year-old, who is presently on a fantastic run for Serie A side Napoli, where he has four goals in six appearances, stated that he used to do basic work like cleaning gutters and fetching water to survive as a child.

"Most people understand what I'm saying because they've been through much worse [situations] than mine, and nothing is guaranteed where I grew up because everything you want, you have to fight so hard for it," he stated, as quoted by Head Topics.

"I remember when I was younger, I used to clean the gutters for my landlord for 20 Naira, and I also did some cleaning duties for my neighbors near my house, like fetching water for 80 Naira."

I enjoyed doing these things because I believed it was vital to me to get this money after working so hard for it. "I was aware of how to use this money and assist my family." My brother used to sell newspapers, and my sister used to sell oranges when we were kids. I was in the middle of the road with water and had to chase down automobiles and offer them drink in order to get the money. "I am grateful for where I am today because of all I've been through; it has formed me into the man I am." That is something for which I am truly grateful to God."

"It all started like a dream, a boyhood dream from the slum," the former Lille striker said of his rise to fame. "I feel like I've achieved this feat, it's one of my biggest achievements in life."

His outstanding performance for the Partenopei this season has earned him plaudits from a variety of sources, the most recent of which comes from former Nigerian player Patrick Paschal.

"I've watched Osimhen since his days with the U17 national team, and I've seen his game progress so much and grow to become one of Gernot Rohr's first names on the squad sheet." "I'm pleased with how quickly he's progressing," Paschal added.

Mourinho confesses to having a "emotional connection" with Newcastle, but claims he is content at Roma.

"He's quick, good with his head and both legs, and he's gifted with a goal-scoring nose." Osimhen isn't the type of traditional centre-forward that waits around the penalty box waiting for long balls to score goals; instead, he drops back to assist his defenders and has superb holdup play.

"As I've seen in previous Super Eagles matches, the Napoli striker has added something." He is a leader on the pitch and in the locker room, and he leads the high press during games. He is consistently progressing in the Italian league and with the Super Eagles, which I believe is beneficial to his career and to Nigeria."

When Napoli takes on Torino at Diego Armando Maradona Stadium on Sunday, Osimhen will be hoping to keep his starting spot.