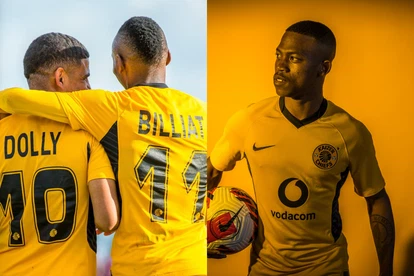 It’s not a new team but a new squad at Kaizer Chiefs. Let’s take a look at three new attacking combos to expect.

So with the attack being the area that will attract the most attention, we have formed three combinations coach Arthur Zwane will be testing.

With Kamohelo Mahlatsi and Ashley Du Preez standing out as exciting new signings in attack, how will they combine with Keagan Dolly and Khama Billliat?

Should Zwane play with Du Preez as a lone striker, we can expect Mahlatsi, Billiat, and Dolly behind him.

A three-man attack is another possible structure. Billiat, Dolly, and Du Preez are in the front line, and they switch places with each other as the game goes on.

Last season, these two players helped each other score or set up 29 goals. Photo by @Vodacom/Twitter

Who said that Billiat's best position is as a center forward? Was it Pitso Mosimane or Rhulani Mokwena?

With a mobile partner to open up spaces for the Zimbabwean to attack, we expect Du Preez and Billiat to be tried together right away.

No matter what Zwane decides, Amakhosi will be a lot less predictable when the 2022/23 season starts.

We all know by now that Yusuf Maart, Mduduzi Shabalala, Dillan Solomons, Lehlohonolo Matlou, and Kamohelo Mahlatsi are among the players that the Glamour Boys have signed.

Even though Arthur Zwane hasn't finished bringing in new players yet, we already have some ideas for a possible new lineup.

Here is an imaginary 4-2-3-1 formation with Maart and Sithebe as the double six. Here is the full story.