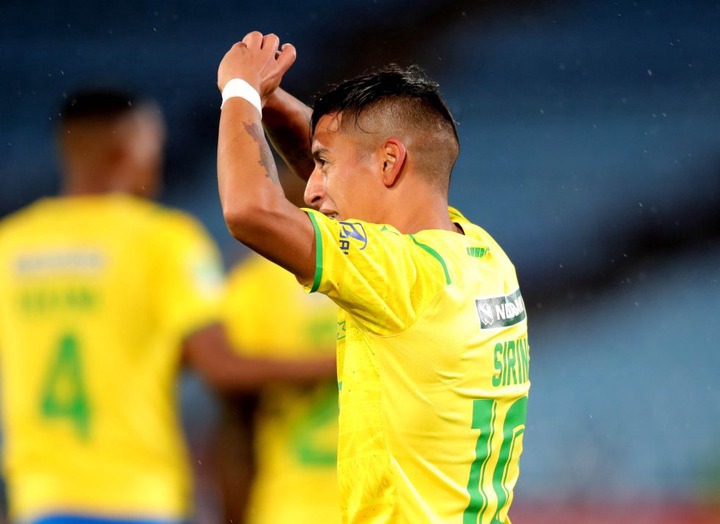 Mamelodi Sundowns ended their season with a win over Royal AM by the score of 3-2 on Monday evening, despite the fact that they were missing upwards of 17 players. The triumph was inspired by Gaston Sirino.

As a result of the influenza outbreak at the club, Reyaad Pieterse, Aubrey Modiba, Andile Jali, and Themba Zwane have all been taken out of the lineup. Their places have been taken by Kennedy Mweene, Lyle Lakay, Sphelele Mkhulise, and Gaston Sirino.

The final player chosen opened the scoring with a spectacular finish in the twelfth minute by putting a long ball from Mkhulise beyond the goalkeeper for Royal AM, Patrick Nyame.

"Thwili Thwala" had gotten off to a strong start in the first half, but after Sundowns' first goal, they became more reserved, and the features that emerged in the first half were intriguing.

Soon after the break, Thabiso Kutumela made it 2-0 with a shot from the edge of the box that he placed just inside the far post after being set up by Sirino. Sirino had set up Kutumela for the strike.

After then, at that same moment, Kennedy Mweene converted into the game's key hero on the other side of the field by stopping a penalty kick taken by Victor Letsoalo.

However, Letsoalo put his name on the scoresheet in the 69th moment, converting a good assist by Tebogo Potsane into a goal for himself to take credit for.

When there were still 14 minutes left to play, Shaune Mogaila scored from close range after a corner kick to cut the deficit to 3-2. His goal turned the arena into an uproar.

Despite the fact that the home side played a spirited second half, they were unable to overcome a one-goal deficit and lost the five-goal thriller against the 2021/22 DStv Premiership winners.