Thutlwa is the slayer of the Kaizer Chiefs, and the Black Leopards are fighting to avoid relegation.

By OctoberThe25 (self media writer) | 7 months ago 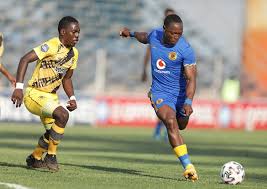 Tiklas Thutlwa may have been a relative unknown before Wednesday, but he will now be forever known in Thohoyandou as "The Amakhosi Slayer" after his brace gave Black Leopards a new lease on life in their fight to avoid automatic relegation.

Thutlwa, 22, had never scored in the DStv Premiership before, but he scored either side of halftime to lead his team to a thrilling 2-1 victory and, more importantly, three crucial league points for Limpopo.

The Limpopo-based club remains at the bottom of the table, but they are clearly not giving up without a fight, as they are now only three points behind Chippa United. The bottom Dstv Premiership club will be relegated to the Glad Africa Championship, while the 15th-placed team will be given another chance to stay up through the playoffs.

When the Chiefs return to the domestic Dstv Premiership, they are a shadow of the team that advanced to the CAF Champions League semi-finals.

Coach Gavin Hunt's frustration at not being able to establish some sort of consistency in his starting lineup has subsided as he travelled to Thohoyandou without five of his key players once again.

Dumisani Zuma, Khama Billiat, and Lebohang Lesako were all unavailable due to injuries, while Njabulo Blom and Willard Katsande were suspended.

For the match against the relegation candidates, Happy Mashiane, Nkosingiphile Ngcobo, Lazarous Kambole, and Darrel Matsheke were all called into the starting XI.

However, the changes appeared to galvanize Chiefs in the early stages, as Kambole raced onto a deft flick on from Leonardo Castro to give them an early lead.

The Zambian, who was making his Amakhosi debut, played the ball across the goal area to Mashiane, who was well positioned for a simple tap in.

Mashiane's initial strike, however, was superbly saved by Jonas Mendes in the Leopards goal. Castro did not waste the opportunity, as he followed up his initial flick on by being the first to react to the rebound inside the Leopards box, drilling the ball home and giving the Amakhosi an early lead.

Leopards, on the other hand, are in survival mode, and they knew they had to dig even deeper now and couldn't afford to give up. If they wanted to stay in the top flight of South African football, they needed to fight back and keep pressing.

Thutlwa had already established himself as a threat early on, and after missing an earlier chance when his strike went wide of the post, he had another chance midway through the first half, which required a smart save from Bruce Bvuma after the ball deflected off Chiefs defender Eric Mathoho.

Sanele Mathenjwa came close to snatching the equaliser for the hosts six minutes before halftime with a free header inside the box that sailed slightly over the bar.

Thutlwa, on the other hand, was destined to get his name on the scoresheet when, on the stroke of halftime, he deservedly leveled matters with a tap-in at the far post after a good cross from Tsheamo Mashoene.

Thutlwa's second goal was even better, as he headed home from close range after Tebogo Makobela set him up.

The Chiefs had chances, but the woodwork denied Castro, and Mendes' superb goalkeeping kept Bernard Parker and Sabelo Radeba at bay in the closing stages.

All 16 DStv Premiership League Teams Have Confirmed January 2022 Signings, Check It Out.