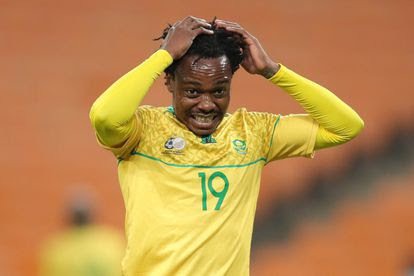 As reports mill in from Egypt, things are taking a wrong turn for the Bafana Bafana center foward, Percy Tau since his Egyptian club Al Ahly were not, by all costs, unwilling to accept his Bafana Bafana call-up, and they showed it by undesirable shocking threats.

These kind of actions by Al Ahly stakeholders, in my view, seem to be protecting Percy Tau from untimely injuries since he's yet to make his debut for the Egyptian giants.

Engaging in any form of stern warnings, threats and stuff of that kind are all pointers which Tau has to consider before dawn.

It's going to pour, not rain for Percy Tau, come October international break. By then l hope he'll be fit for play and the national head coach Hugo Broos has his name on the Bafana Bafana preliminary squad.

As suggested by reports, if Champions of Africa Al Ahly resort to hush stunts against Percy Tau if he made himself available for the national duty, then young Tau is going to fall from the frying pan into the fire.

His road has too many meanders. From Sundowns he went to Brighton and Hove in 2018, without kicking a ball he joined the Belgian league on loan.

He was good there, playing and scoring goals. Before gripping the balance well, Brighton & Hove arranged for his return to his mother club 8n England, the centre forward Percy Tau lacked game time and was hungry to play.

I also have a strong feeling that Pitso Mosimane advised Percy to join him in Egypt since he was not happy in English due to lack of game time.

Al Ahly is a different Egyptian football outfit, rules and regulations out there are very lean and unapologetic. One foot out side the regulated area means parting ways with them, even Jingles is aware of it.

Tau was supposed to look elsewhere in Europe not to back peddle in African football a few years away from home. Age is still on his side, he still have energy to play fast and competitive leagues like the EPL to mention one.

He hasn't achieved anything internationally, so sad to say but he should have fought for a regular place in England. Joining Al Ahly is equivalent to coming back to the starting point.

Two killed, eleven others injured in tractor accident on farm

The video went viral, Pastor asked church member to lie down and flogged them with his belt

Alleged dealer killed in a high speed chase with police

A baker from Limpopo left people speechless with her cake creations.

Best of Venda Limpopo. Check out beautiful houses in Venda.

Limpopo man has everyone speechless with his massive village house. See comments.