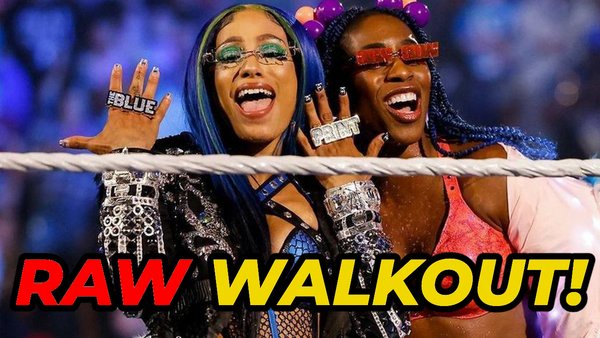 WWE Women's Tag Team Champions Sasha Banks and Naomi walked out of Raw on Monday night, handing over their tag titles and leaving during the broadcast.

When Raw went on the air, the announcers hyped a six-pack challenge to crown a new #1 contender for the Raw Women's Championship. The match was to feature Banks, Naomi, Doudrop, Nikki ASH, Asuka and Becky Lynch. About 45 minutes later, Lynch told Adam Pearce that the tag champs had walked out, and he changed the match to a singles bout between Becky and Asuka for the #1 contender's spot. The walkout was referenced a couple of times on TV, with Corey Graves calling it "unprofessional."

Fightful Select reports that Sasha wasn't satisfied with the creative plans for Raw. She reportedly had a meeting with Vince McMahon to voice her displeasure, but neither party would budge on their position.

Primarily, Banks and Naomi were concerned about not being respected enough as Women's Tag Team Champions, with the direction of the division a major sticking point. The duo also felt uncomfortable being in the ring with two of their six-pack opponents, though they had wrestled everyone involved in the past - with zero issues. WWE talent that Fightful spoke to had not heard of Sasha and Naomi considering any of the other wrestlers "unsafe" until WWE's official statement was released.

Prior to the walkout, Banks and Naomi had eight hours to go over and put together the planned Raw match with the proposed opponents.

Reportedly, Sasha and Naomi wanted to work with Nikki and Doudrop at Hell in a Cell, but that pitch was rejected. A second pitch to have the Scots interfere in the Raw Women's Championship match between Naomi and Bianca Belair also was turned down (Fightful reported that Naomi was scheduled to win the six-pack challenge and become #1 contender for the Raw strap, though Asuka scored the win in her absence).

Banks and Naomi's walkout necessitated notable Raw rewrites, with a number of hastily-assembled segments put together to fill the holes in the rundown. Word that the duo had left the show made its way outside of the promotion by the time Raw hit the airwaves.

Fightful also reports that the match was constructed to ensure Naomi and Sasha would not interact, and Doudrop and Nikki wouldn't come into contact with each other either.

Banks and Naomi won the tag titles at WrestleMania 38 in a fatal four-way match. They weren't booked at WrestleMania Backlash, but successfully defended the titles on SmackDown last Friday against Natalya and Shayna Baszler.

Here Is How Much Pep Store Staff Earn Per Month

All Big brother Naija housemates who were disqualified in the game