Manchester United captain Harry Maguire earned opprobrium from Sky Sports pundit Roy Keane after sending a message to his detractors with his goal celebration for England against Albania last week.

Maguire returned to Premier League play on Saturday, and after being caught in possession by Tom Cleverley on the edge of his own box with United behind 2-1 to Watford, he was sent off for a second bookable offence.

In his 121st game for Manchester United, Maguire has been sent off for the first time in his career.

We're excited to hear what Keane has to say about it.

When Scott McTominay pulled Josh King down in the box in the sixth minute, Watford were given a penalty. David de Gea saved Ismail Sarr's original spot-kick, but Kiko Femenina stepped up and tucked away the rebound.

Femenina was in the box when the penalty was taken, according to VAR, and referee Jon Moss ordered it to be retaken.

Sarr stepped forward once more, and De Gea made another save.

The Hornets ultimately took the lead in the 28th minute, when King converted Emmanuel Dennis's cross for a well-deserved 1-0.

Sarr made up for his missed penalties soon before halftime by blasting into the far corner for a 2-0 lead.

However, in the 70th minute, captain Harry Maguire was sent off for taking down Tom Cleverley after he was caught in possession on the edge of his own box. 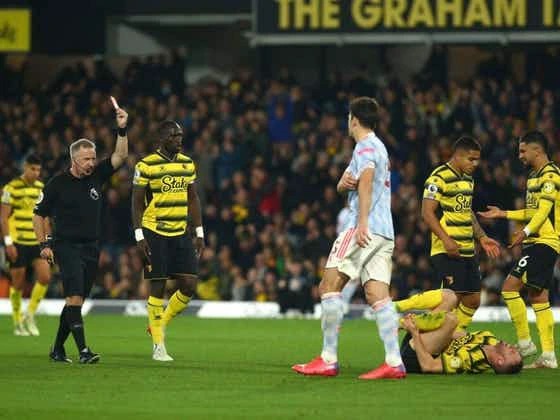 The ball was then put in the net by Cristiano Ronaldo, but he was penalized for offside.

After being denied by De Gea minutes earlier, Joao Pedro clinched the victory for Watford in stoppage time when he banged in at the near post.