By 1NewsAfrica (self media writer) | 7 months ago 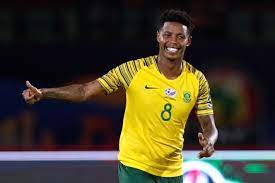 The footballer has previously played for the University of Pretoria Amatuks, where he helped the side reach the top eight of the Premier Soccer League, and for Mamelodi Sundowns Football Club, one of the country's most successful clubs, from 2013 to 2016, when he moved for an overseas deal.

From 2016 to 2017, he was a member of Vitória de Guimares, a Portuguese football club. He was then purchased by Amiens, a French football club, and loaned to Rangers, a Scottish team.

The Amiens' president, Bernard Joannin, addressed the media about the player's future, revealing that the player will return to his parent club in France, Amiens, as his loan deal is about to expire.

The 28-year-old soccer star, though, is attracting interest from teams in the South African Premier Soccer League as well as teams in Germany, who would sign him if all goes well.

Pirates Star Receives a Luxurious Gift From This Brand