Ahead of their game against Amakhosi this Sunday, SuperSport United coach Kaitano Tembo has spoken of his respect and admiration of his counterpart, Stuart Baxter. Tembo has served as an assistant to Baxter, during his time at the Tshwane outfit, and he revealed Baxter showed a lot of confidence in him. 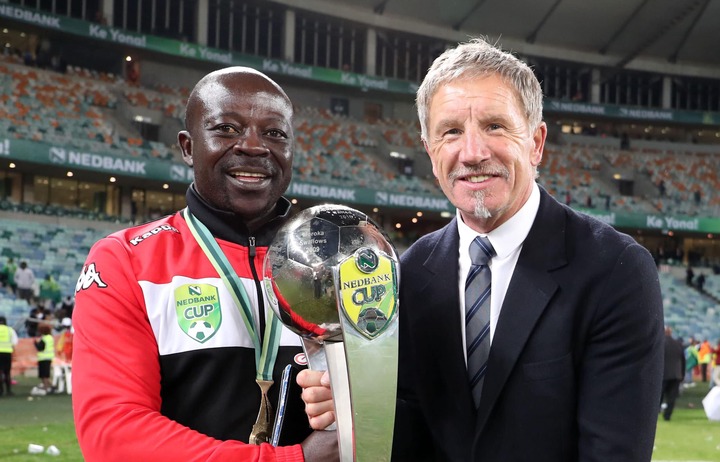 Apart from admiring his ability as a coach, Kaitano Tembo also spoke of the character of the Kaizer Chiefs coach.

“All I know is that coach Stuart Baxter is a very good coach, I think he has played a huge role in my development as a coach. He is someone who really believed in me, he gave me an opportunity to see the game in a different perspective. He trusted me, he had confidence in me."

“I remember, at some point, I went to TP Mazembe, he was not feeling well, and he just said, 'this is an opportunity for you to create your own personality as a coach and if you go there and do well, that is your success. If you don’t do well, I will take the blame', and that showed what kind of person he is.” said Tembo

The SuperSport United mentor also believes that Stuart Baxter is slowing turning Kaizer Chiefs to how he wants them to play and is expecting a tough match come Sunday.

“He is a coach who is always coming up with new ideas, a training session, there is always something new to learn. And I think it is just a matter of time before Kaizer Chiefs can start playing the way he wants them to play,”

Kaitano Tembo hasn't lost to Kaizer Chiefs in the previous 5 meetings and he will be eager to maintain that record despite going up against his former superior.

“looking at the games that he has played, there is a few changes as well, in terms of how he is approaching the games now and I know it is going to be a tough game and we have to be ready, we have to prepare well for this game.” - Kaitano Tembo.

A huge blow For Kaizer Chiefs, Things Are Difficult