MUST READ: What Kaizer Chiefs coach Arthur Zwane said to young star Mduduzi Shabalala before he scored his first goal. 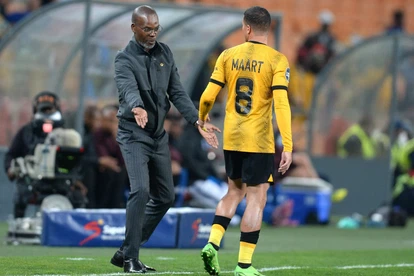 Next, Chiefs will play Mamelodi Sundowns away on Saturday, August 13, at 15:30.

Shabalala, a young player who has been getting a lot of attention, came on late in the game against Maritzburg and scored Chiefs' first goal.

His impressive goal came when he got behind the two center backs for Maritzburg United and hit Khama Billiat's cross into the box with his left foot.

CHIEFS ARE SHOWING SIGNS THAT THEY COULD BE BUILDING SOMETHING SPECIAL

Arthur Zwane has now said that they are always helping the 18-year-old promising and stylish midfielder. The coach also talked about the most important message he gave the young player.

"For Mduduzi, we know how these young people think and what is going on where he comes from," Zwane told TimesLive, as quoted.

"Most of us were born there and grew up there. The idea is that praising these boys too soon will make them think they have made it. Mdu is lucky that he is a humble young man. We spent a lot of time with them to let them know what was going on in the world, and they listened.

"I told him today that I'll give him the chance no matter what, whether we're in a tough spot or in the lead. I told him, "I want you to go out there and show off your talent and be yourself." He did a great job.

"With his size, he went in and pushed, and he was full of energy, which is what we want from our young people. This can only help our different age-group national teams, because the country needs players who can play at this level to get things right."

After Ashley du Preez, Keagan Dolly, and Shabalala scored goals to give the team its first win of the season, Zwane also praised the team as a whole.

"Yeah, well, sometimes football is a funny game. I think we played better in the last game than we did today, but we still lost," Zwane said on SuperSport TV.

"Today, we played in spurts, but we were good at scoring, and we could have scored more. But I'm most proud of the young people who came on stage and kept the same pace.

"They took the game to the other team because we were already worried that they would slow down at some point and let the other team back into the game. As their confidence grew, they could score at any time, whether it was a free kick or a dead ball.