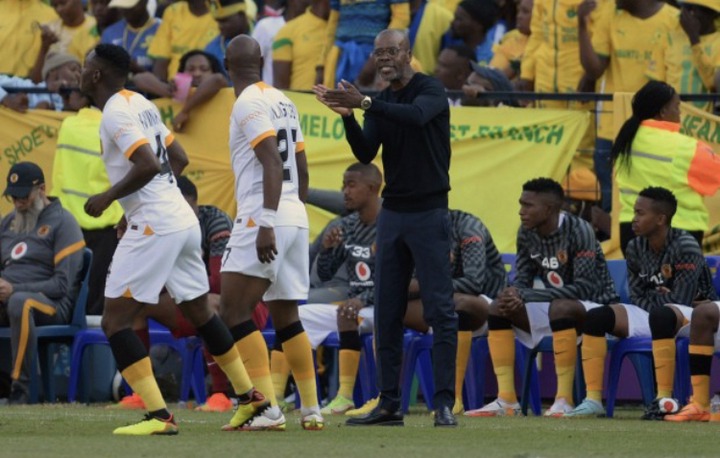 Kaizer Chiefs were the cause all their own problems against Mamelodi Sundowns at Loftus Versfeld Stadium on Saturday as they experienced a 4-0 association rout.

It was not the Soweto club's day as they offered delicate objectives and botched a few simple opportunities to score, including a punishment.

Bosses could never have exacerbated a beginning as an unfortunate touch and, surprisingly, a more terrible back-pass in the 6th moment from Siyabonga Ngezana permitted Gaston Sirino to take the ball in front of Bruce Bvuma prior to sticking it into an open objective from a couple of meters out.

Ngezana's bad dream went on as after 10 minutes he pulled down Peter Shalulile inside the crate as the Namibian was running onto Neo Maema's pass.

Ref Victor Gomes inaccurately reserved Zitha Kwinika for the foul, yet accurately highlighted the spot, from where Shalulile serenely opened the punishment pass Bvuma; 2-0 following 16 minutes to the hosts.

Gradually Amakhosi started to play themselves back into the game and they made a decent opportunity on the half-hour mark when Keagan Dolly selected Khama Billiat who thusly teed up Cole Alexander, yet the previous Ajax Cape Town midfielder terminated into the side-netting.

After five minutes Chiefs showed incredible diligence to win the ball before Billiat was liberated down the left flank from where he played a low cross for Yusuf Maart, whose first touch was phenomenal, just for his second touch to expand the ball over the bar.

The last opportunity of the initial half saw Brian Onyango heading wide from a Sundowns corner.

After the restart, the Glamor Boys showed a lot of aim and ought to have pulled an objective back when the ball tumbled to Reeve Frosler after a few messy Downs guarding, yet the Chiefs left-blew up wide from short proximity.

Minutes after the fact and the Soweto outfit took care of not taking their risks as Sundowns broadened their lead on 52 minutes when Shalulile terminated home from 10-yards out in the wake of consolidating great with Neo Maema and afterward getting the last pass from Arthur Zwane.

Bosses' final part substitute Kgaogelo Sekgota had given Amakhosi seriously going after impulse and he procured his side a punishment after a conflict with Tebogo Mokoena solidly toward the edge of the case.

Replays recommended it might have been a delicate call and regardless the scoreline stayed unaltered as Downs guardian Ronwen Williams effortlessly saved Billiat's manageable punishment as well as a scraped follow-up from the Zimbabwean.

Shalulile looked put forth for his full go-around objective when he hustled through on objective in the 72nd moment, however Kwinika did well to get back and make the block.

The following objective wasn't long in that frame of mind as substitute Nasir Abubeker ran clear down the left, cut back inside, beat two or three safeguards with a drag-back and afterward got with an exceptional low-calculated shot with his left foot in the 76th moment.

The loss implies Chiefs have won only one of their initial three games and have lost two times.