By zulupalongo (self media writer) | 4 months ago 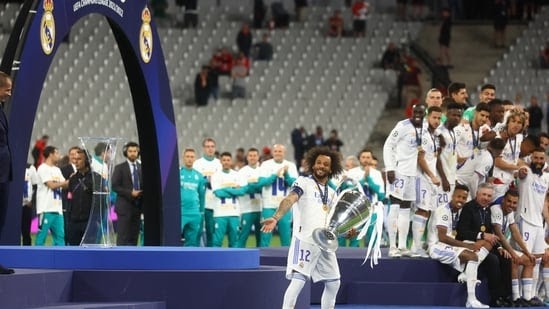 Final of the Champions League in 2022 Vinicius Jr scored the game-winning goal for Real Madrid in the second half of their European Cup victory over Liverpool, which took place at the Stade de France in Paris. Real Madrid won their 14th European Cup overall. The Spanish powerhouses were victorious in the Champions League for the seventh time in the last nine years. The Madrid winger from Brazil scored a goal from close range in the 59th minute to give his team a 1-0 lead in the championship matchup. The goal was scored from Federico Valverde's shot that was directed across the face of the goal. The Spanish powerhouses have already won twice as many European Cups as the team currently in second place on the list, AC Milan. Liverpool is still on position six. Prior to that, the game was deadlocked at 0-0 when it reached the halftime break, with Liverpool having the upper hand in terms of possession while also having a shot go off the post. There was a delay of 36 minutes before the game started because police officers were attempting to stop those who were trying to enter the stadium by force. Both teams got off to a slow start, but Sadio Mane came even closer to scoring with a low attempt in the 21st minute that Madrid goalkeeper Courtois managed to deflect onto the post. Liverpool kept up their high-pressure style of play, with Mohamed Salah putting the Spanish goalkeeper through two tests in an attempt to take the lead for his team. Karim Benzema's attempt to score for Madrid just before halftime was deemed offside after a lengthy review by the video assistant referees (VAR). At the 43rd minute mark, the French striker did score a goal by firing the ball home.

Content created and supplied by: zulupalongo (via Opera News )