VIDEO:Malema advocates for the removal of face masks 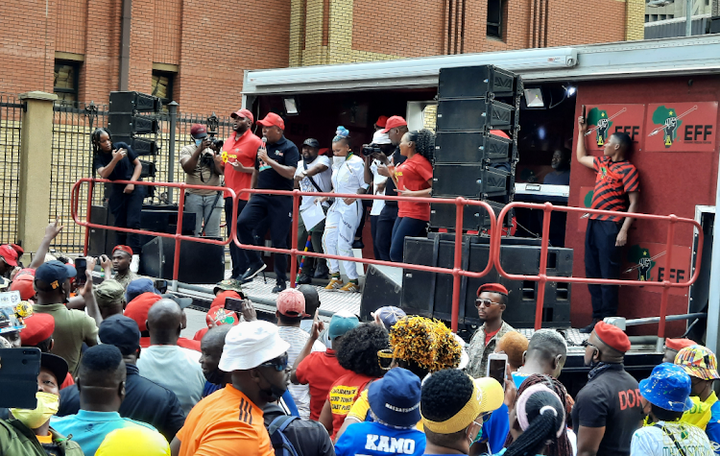 Before addressing the crowd, Malema led hundreds of EFF supporters on a march around Church Square. He advocated for the abolition of face masks as a precaution against Covid-19, as well as the opening of stadiums to spectators regardless of vaccination status.

"Take off the mask, open the country and the economy, and we will take responsibility for our own lives," he said to applause from a crowd that included fans of various football clubs as well as artists.

"We are all encouraged to vaccinate, but no one will be forced to vaccinate." We must vaccinate ourselves — even at the stadium, we do not require anyone to be vaccinated or not.

"Those who want to go to the stadium should go there." We believe in science and vaccines as a solution to the problem, but we do not force people to vaccinate.

We have told the entire country and the world that Aids kills and that they should use a condom. However, we never went into every room to see if anyone was using condoms. We simply encouraged them to do the right thing because it is their choice.

"As leaders of society, all we can do is persuade our people to vaccinate, but we will not force them."

Malema stated that if the government does not provide an indication of when stadiums will open within the next 10 days, the EFF will begin a sit-in at FNB Stadium.

"We are here to demand a simple thing: open stadiums in order to open the economy." Many people want to say what we are saying, but they are afraid.

We will go to the SA Football Association (Safa) offices if stadiums are not opened within a week. We'll try to find our way to FNB Stadium and sit there until the next morning to prove that a stadium doesn't kill people.

There was a [ANC] rally in Limpopo, and many activities were held there, but there is no report today that there is an increase in corona in Limpopo as a result of that rally and activities.

"We had a rally in KwaZulu-Natal, and today there is no report that corona increased in KZN after the EFF left." That is the only science we can rely on; otherwise, they are deceiving us."

"They have neglected this department, and we are requesting that [President] Cyril Ramaphosa appoint an energetic minister."

"As a department, we believe it was an opportunistic act because everyone is aware that the government has been working on a plan to open up the return for spectators since October," Mkhize said.

"That has been communicated to sports bodies, and all of them are fully aware because minister Mthethwa engaged them and outlined the plan, which has a phased-in approach."

The plan was to explain that once Covid-19 reaches this level, we will increase to 2,000 fans, which is where we are now. Following that, as experts advise through the Department of Health, we will move to 20%, then 50%.

"We should have reached that level by now if it hadn't been for Omicron, so there is a very clear plan because the government cannot be reckless." We must ensure that the lives of spectators and other citizens are not jeopardized.