Backstage update on WWE's plans for The Usos, RK-Bro, and unifying their Tag Team Titles. 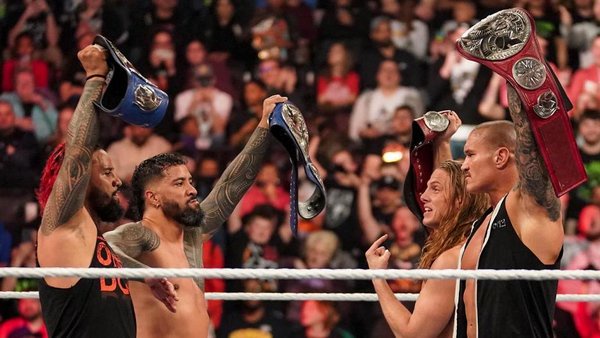 WWE does not currently plan on unifying its Raw and SmackDown Tag Team Championships.

Dave Meltzer reported during the latest edition of Wrestling Observer Radio that while RK-Bro and The Usos are currently slated to wrestle each other, this will not be a unification match. Plans change, of course, and the decision-makers may end up changing their minds, but that's where things stood at the time of publication.

The Usos and RK-Bro were originally linked to a unification bout at WrestleMania Backlash 2022 (8 May), following Roman Reigns unifying the Universal and WWE Championships at WrestleMania 38. This ended up not happening. Instead, The Usos and Reigns teamed in a main event victory over Randy Orton, Riddle, and Drew McIntyre.

On this week's episode of Raw, RK-Bro announced they would be heading to Friday's SmackDown show to demand their unification bout. This is despite Riddle eating the pin to Roman at Backlash.

Meltzer reported in last week's Wrestling Observer Newsletter that WWE had never made serious plans to unify the Tag Team Championships heading into WrestleMania Backlash. It appears, for now, that nothing has changed in this regard.