DURBAN : Mamelodi Sundowns were finally crowned Champions of the DStv Premiership after defeating Royal AM 3 - 2 at the Chatsworth Stadium in Durban on Monday afternoon. 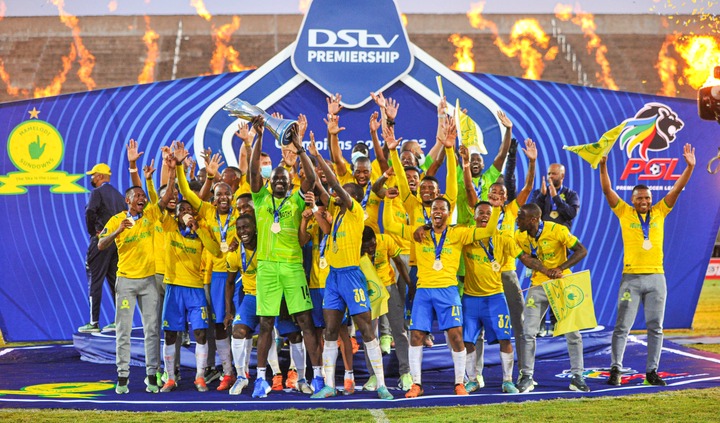 The game was originally scheduled for Saturday afternoon but was disrupted by a waterlogged pitch following heavy rains at KwaZulu-Natal.

It was chalk and cheese on Monday, with the sun shining bright at the Chatsworth Stadium, and ready for the crowning of the Champions, for the fifth time in a row.

The game had a twist though with the Brazilians confirming that a number of players suffering from flu following the heavy rains over the weekend.

That did very little to affect the momentum of the Champions as they started the game like a house on fire with Gaston Sirino opening the scoring in the 13th minute, profiting from a great Siphesihle Mkhulise.

The game went into the break with the Brazilians leading 1 - 0.

Sirino was in inspired form as he turned provider for Thabiso Kutumela, who cooky slotted Sundowns second goal in the 48th minute to give the Champions a two goal caution.

The away side weren't done as they raced to an emphatic 3 - 0 lead, with the league's top scorer Peter Shalulile netting his 23rd league goal of the season to cap off what was an unbelievable season for the Namibian.

The home side, like they have done in the corresponding fixture, came back to cause a scare for the Chloorkop side. Prolific striker Victor Letsoalo was handed a penalty but was saved by keeper Kennedy Mweene to deny him his 15th league goal for the season in the 64th minute.

But the 29 year old striker was not to be denied as he finally scored his 15th league of the season and pulled one back for Thwihli Thwahla in the 69th minute.

The home side plotted a late come back as Shaune Mogaila set up a grandstand finish by netting Royal AM's second with 14 minutes to go.

But Sundowns held on for all three points and dents Royal AM's chances of qualifying for continental football next season.