A PSL deadly striker is being accused of carrying bad luck

By Khehlanews (self media writer) | 23 days ago

Former coach Luc Eymael has strongly dispelled accusations against striker Mohammed Anas of carrying bad luck after being released by TS Galaxy.Anas was recently allegedly accused of being cursed by teammates after suffering relegation on numerous occasions. 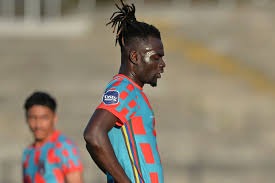 I think it was the club's first trophy in 24 years and one of the best positions in the league standings in the PSL.He was also decisive in every game for Free State Stars and when Free State Stars was later relegated he had already left the club. He left after the Nedbank Cup, I think.

As touching as it is this Luc Eymael guy just wants to ride on this story to make people forget about his racism stunt.It means this season there is no team dt is going to be relegated.The girlfriend came out of the closet!Bobby to sign you both as Baxter is not a football coach that one.

Listenening his interview yesterday with Andile Ncube it was too touching shame and I blame you media the guy even cried.This is so unprofessional by TS Galaxy as a club and players.what they did to him is bad.He has a wife n a girlfriend to take care of.