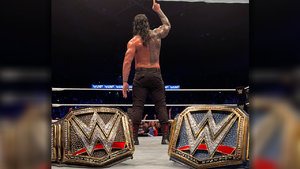 Despite Roman Reigns claiming that he was entering a "new phase" in his career at a house show this weekend, people within WWE don't expect the Undisputed Universal Champion to leave anytime soon.

Speculation on Reigns' future stemmed from a promo cut in Trenton, New Jersey, with the SmackDown kingpin claiming he didn't know if he'd ever be back to the town again, thanking the audience for supporting him these past 10 years. Fightful Select report that despite this, WWE sources don't expect him to depart for the foreseeable future - and he is currently factored into creative plans.

WWE has expected Reigns to require time off for movie roles for a while now, though company higher-ups and other staff members have not been clued in on any planned time off at the moment.

Having built much of its programming around Roman over the past two years, WWE will likely push the boat out to keep the promotion as Reigns' top priority. Currently, WWE does not see "an end in sight" for its top champion.

That Reigns was talking about cutting back his live event schedule was a popular interpretation of his Trenton promo after the fact. Fightful's report notes that one WWE source indicated a belief that this was what the 36-year-old meant, rather than leaving outright.

“Nowhere to hide this time, Group of Zimbabwean guys got captured by the Cops for doing this