The last day for Gavin Hunt

By khutsiso (self media writer) | 1 year ago 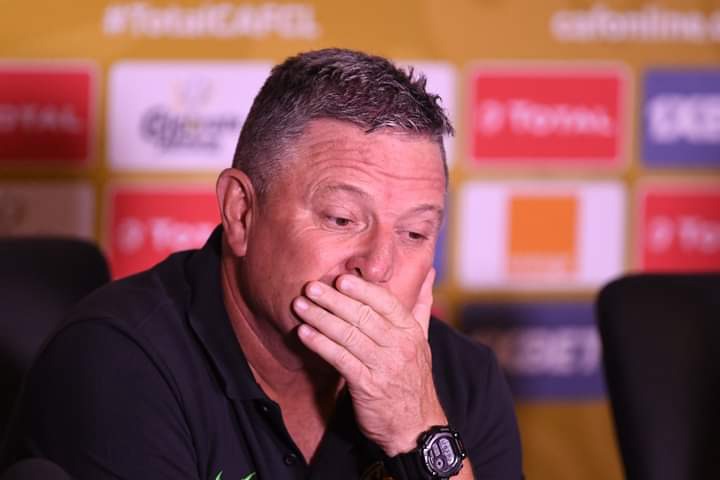 The contract was terminated yesterday after he lost a Black Leopard 2-1 and 3-0 to Simba. The vision of coach Gavin Hunt in Naturena has become shattered. He took the club to the semi-finals of Caf for the first time in history. Thou his record was not good at club, and funs were not happy with the rotational squad in the team. The defeat left Amakhosi in 11th place on the league standings - five points above the relegation zone with two matches left in the current campaign.

The Naturena-based giants released the following statement on Friday evening with the club also confirming that Arthur Zwane and Dillon Sheppard will take charge of the team. "Kaizer Chiefs have terminated coach Gavin Hunt’s contract with immediate effect. Hunt joined Amakhosi in September 2020 ahead of the 2020/21 season," a club statement read.

"In the interim, Assistant Coaches Arthur Zwane and Dillon Sheppard will take charge of the senior team. The Club will make further announcements in due course."

The accomplished tactician had joined Chiefs prior to the start of the current campaign as Ernst Middendorp's replacement.

Hunt inherited a Chiefs team that had finished second in the league in the 2019/20 season under Middendorp and he was expected to take the team one step further and clinch the PSL title.

The Soweto giants struggled under Hunt's guidance in domestic competitions with the club unable to sign new players due to the Fifa transfer ban.

However, Chiefs have performed well in the Caf Champions League with Hunt having created history by leading the Soweto giants to the semi-finals for the first time in the club's history.Before Hunt was appointed Chiefs coach, Amakhosi had never reached the group stage, but he changed that and he led the Glamour Boys to a second-place finish in Group C which saw the team reach the knockout phase.

Chiefs are scheduled to face Moroccan giants Wydad Casablanca in the two-legged semi-final next month.

Prior to that, Amakhosi will take on Lamontville Golden Arrows and TS Galaxy in their last two PSL games of the current season.

Questions to be asked

2. The two assistant coach will they save the sinking ship?

Content created and supplied by: khutsiso (via Opera News )

The information below is important for all South Africans who have benefited from the R350 Grant.

Look at how court concluded that Ramaphosa can be sued for Marikana tragedy. Read the following.

#Uzalo: Frustrated Sbu sneaks into Nkunzi’s house like a snake and poisons him - Watch