Erling Braut Haaland (né Håland, [ˈhòːlɑn]; born 21 July 2000) is a Norwegian professional footballer who plays as a striker for Bundesliga club Borussia Dortmund and the Norway national team. A prolific goalscorer, he is recognised for his pace, athleticism, strength, and precise off-the-ball movement, and he has been considered as one of the best young footballers in the world.

Haaland with Red Bull Salzburg in 2019 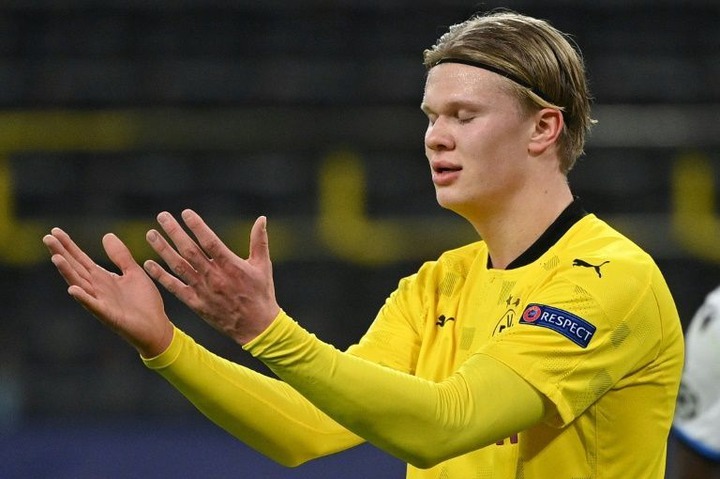 Haaland started his career at his hometown club Bryne in 2016, and moved to Molde the following year; he spent two seasons with the club before signing with Austrian side Red Bull Salzburg in January 2019.At Salzburg, he won two Austrian Bundesliga titles and one Austrian Cup.

Haaland became the first teenager to score in five consecutive UEFA Champions League matches during the 2019–20 season.[8] In December 2019, he completed a transfer to Borussia Dortmund for a fee reported to be in the region of €20 million. He carried on his goalscoring success in his Champions League campaign, becoming the second teenager to score ten goals in the competition, and won the 2020 Golden Boy award.

Following the 2019 FIFA U-20 World Cup, in which Haaland won the tournament's Golden Boot after he scored a record nine goals in a single match, he made his debut for the Norway senior team in September 2019. 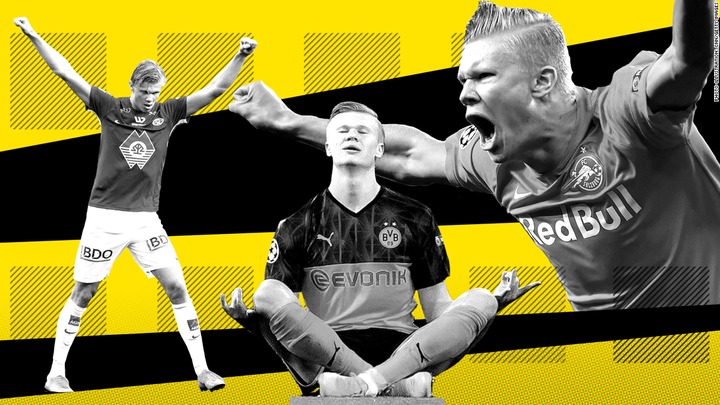 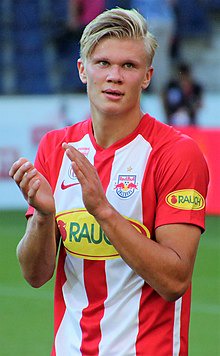 Haaland was born on 21 July 2000 in Leeds, England, as his father Alf-Inge Håland was playing for Leeds United in the Premier League at the time.In 2004, at the age of three, he moved to Bryne, Norway, his parents' hometown.Along with playing football from an early age, Haaland partook in various other sports as a child, including handball, golf, and track and field.[12] He also allegedly achieved a world record in his age category for the standing long jump when he was five, with a recorded distance of 1.63 metres in 2006.

Haaland started in the academy of his hometown club Bryne FK at the age of five.In an interview with Goal.com, Haaland's former youth coach, Alf Ingve Berntsen, talked about his early talent:

I saw Erling for the first time when he was five when he joined indoor training with a group one year older ... His first two touches led to goals. He was very, very good from the first moment, even though he hadn't played in the club before. He started playing in his own year group, but because he was so much better than the others, we immediately pulled him up to Under-6.

During the 2015–16 season, Haaland played for Bryne's reserve team and impressed, scoring eighteen goals in fourteen matches.In May 2016, Gaute Larsen was sacked as Bryne manager and youth coach Berntsen was promoted to caretaker boss. Having worked closely with Haaland in other youth teams, the interim manager handed the teenager his first start, three months before his sixteenth birthday.His debut was a second-tier 1. divisjon match against Ranheim on 12 May 2016.

After having initially being deployed as a winger, Berntsen put Haaland in his favoured central role as a striker after a few matches. Although he failed to score in his breakthrough season at Bryne, Haaland was offered a trial by German club 1899 Hoffenheim before eventually moving to Molde FK to play under Ole Gunnar Solskjær.Haaland made sixteen total senior appearances for Bryne.

Haaland playing for Molde FK in 2018

On 1 February 2017, Molde announced the signing of Haaland.He made his debut for the club on 26 April 2017 in a Norwegian Cup match against Volda TI, scoring his first Molde goal in a 3–2 win.Haaland's league debut came on 4 June 2017, being brought on as a 71st minute substitute against Sarpsborg 08. After receiving a yellow card in just over a minute of play on the pitch, Haaland scored the winner for Molde in the 77th minute, his first Eliteserien goal.His second strike of the season came on 17 September, as he bagged the decisive goal against Viking FK in a 3–2 victory. In the aftermath of the game, Haaland received criticism from teammate Björn Bergmann Sigurðarson for celebrating his goal towards Viking supporters.Haaland finished his first season at Molde with four goals in twenty appearances.

On 1 July 2018, Haaland scored four goals in the opening 21 minutes of a 4–0 defeat of SK Brann, securing his side victory over the unbeaten league leaders at the time. Molde manager Ole Gunnar Solskjær after the match compared Haaland's style of play to Belgian forward Romelu Lukaku, and revealed the club had rejected several bids for the striker from different clubs.In the following match a week later, Haaland continued his scoring run with a brace against Vålerenga in a 5–1 win.He scored his first goal in European competition during Molde's 3–0 Europa League victory against KF Laçi on 26 July.Due to a sprained ankle, Haaland did not participate in Molde's last three league matches of the season.For his performances in the 2018 Eliteserien, Haaland received the Eliteserien Breakthrough of the Year award.He finished the 2018 season as Molde's top goalscorer, scoring sixteen goals in thirty matches across all competitions.

On 19 August 2018, Austrian Bundesliga champions Red Bull Salzburg announced that Haaland would join the club on 1 January 2019, signing a five-year contract.[7] The Athletic's Phil Hay would later reveal that prior to his move to Salzburg, Haaland was also subject of an offer from his father's former club Leeds United.

On 19 July 2019, Haaland scored his first hat-trick for the club in a 7–1 Austrian Cup win against SC-ESV Parndorf and followed this up with his first hat-trick in the Austrian Bundesliga on 10 August, scoring three in a 5–2 victory against Wolfsberger AC.He got a third hat-trick for the club on 14 September in a 7–2 victory over TSV Hartberg, taking his season tally to eleven league goals in seven appearances.Three days later, Haaland made his debut in the UEFA Champions League against Genk, where he scored yet another hat-trick in a 6–2 victory, his fourth overall for Salzburg.

In his next two matches of the Champions League season, Haaland recorded a goal against Liverpool at Anfield and a further two against Napoli, becoming only the second teenager after Karim Benzema in the history of the competition to score in each of his first three appearances. His six goals were also the most scored by any player in their first three Champions League matches.[35] After converting a penalty in Salzburg's reverse fixture against Napoli, Haaland became the first teenager to score in his first four matches in the competition, and only the fourth player of any age to achieve this feat, following Zé Carlos, Alessandro Del Piero and Diego Costa.On 27 November, he came off the bench to score another goal against Genk, joining Del Piero, Serhiy Rebrov, Neymar, Cristiano Ronaldo and Robert Lewandowski as the only players to score in the first five matches of a Champions League group stage, and becoming the first teenager to score in five consecutive matches in the competition.

Despite being a reported target of Manchester United and Juventus, Haaland completed his transfer to German Bundesliga club Borussia Dortmund a few days before the January 2020 winter transfer opened, for a fee reported to be in the region of €20 million, signing a four-and-a-half-year contract.

Haaland made his debut for Dortmund away at FC Augsburg on 18 January 2020, coming on as a second half substitute and scoring a hat-trick within 23 minutes of a 5–3 win.[40] He became the second player in Dortmund history after Pierre-Emerick Aubameyang to score three goals on their Bundesliga debut.[41] Six days later, Haaland once again came on as a substitute to make his second appearance for Dortmund, against local rivals 1. FC Köln. He scored after twelve minutes and got a second goal ten minutes later, helping his side to a 5–1 victory.Haaland became the first Bundesliga player to score five goals in his opening two matches, as well as the fastest player to reach that tally (56 minutes played).On 18 February, Haaland scored both Dortmund goals in their 2–1 first leg victory over Paris Saint-Germain in the Champions League round of 16. This brought the Norwegian teenager's total to ten Champions League goals for the 2019–20 campaign in only his eighth overall appearance in the competition, adding to the eight goals he had scored for Salzburg in the group stage.

Following the Bundesliga's return during the ongoing COVID-19 pandemic, Haaland scored his tenth league goal of the campaign in a 4–0 win over rivals Schalke 04 on 16 May 2020. It was the first goal in German football since competitions were halted in late March.On 20 June, Haaland scored both goals in a 2–0 win against RB Leipzig to secure second place for Dortmund in the Bundesliga, which would lead to Champions League football in the following season.

On 19 September 2020, in Dortmund's first match of the new season, Haaland scored a brace in a 3–0 win over Borussia Mönchengladbach.[47] He scored his side's equalizer in their 2–3 Der Klassiker defeat to Bayern Munich in the DFL-Supercup on 30 September,[48] and again found the net against Bayern when the sides met in the league on 7 November, with Dortmund losing 2–3 once more.On 21 November, Haaland scored four goals in 32 minutes of a 5–2 away victory against Hertha BSC.These five goals in the month of November saw him crowned the Bundesliga Player of the Month for a second time.He scored a brace in a 3–0 win over Club Brugge on 24 November, becoming the fastest player to reach fifteen (and then sixteen) UEFA Champions League goals, with only twelve total appearances in the competition.Hours before a Champions League group stage match against Lazio on 2 December, Borussia Dortmund announced that Haaland had suffered a hamstring injury, which would keep him out of action until January 2021.

Haaland made his return to the side in their match against VfL Wolfsburg on 3 January 2021.He scored a brace away against RB Leipzig in a 3–1 win on 9 January and got another two goals in Dortmund's 2–4 defeat to Borussia Mönchengladbach on 22 January. On 17 February, Haaland scored two goals and recorded an assist in Dortmund's 3–2 away victory against Sevilla in the first leg of the Champions League round of 16, bring his overall tally in the competition to eighteen goals in only thirteen appearances.