It has become something they are known for. Soccer players are often associated with fast cars, flashy lifestyles, and making a lot of money quickly. 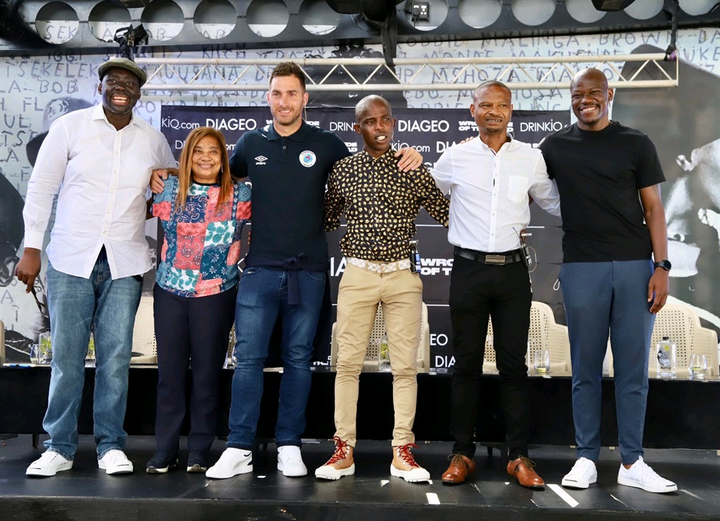 And it could all fall apart if someone got behind the wheel after drinking.

This is why Premier Soccer League legends have come together to teach young soccer players and people in general about how dangerous it is to drive after drinking.

The soccer stars got together at Soweto's hip Konka Lounge to start a new program to stop people from drinking and driving. The "Wrong Side of the Road" campaign uses online conversations between consumers and well-known people to share real-life stories about the problems that can happen when you drive after drinking.

Former Mamelodi Sundowns captain Hlompho Kekana, former Chiefs and Pirates striker Phumlani Mkhize, experienced SuperSport United striker Bradley Grobler, and Banyana Banyana coach Desiree Ellis were all at Konka to help launch the campaign and show their support. The panel, which was led by Bareng-Batho Kortjaas, was made up of these people.

Junior Khanye, who used to play for the Kaizer Chiefs, was also there.

Some of the players tell us why it was important to be a part of the campaign.

Soccer legend Phumlani Mkhize says that it gives them a chance to reach out to everyone, not just soccer players, because drinking and driving affects everyone.

Junior Khanye is thankful to God for giving him the money to buy his dream car.

He started drinking when he was still in high school, when he didn't even think he would play soccer professionally. When he started playing soccer professionally and made a lot of money, he started drinking more. Being exposed to a lot of money at a young age is dangerous, he says. He would have done better in life if people had taught him how to handle money.

"Young players who are just starting out and making a lot of money should get advice on how to handle their money well, because they will waste it on alcohol if they don't. He says, "I wish I had someone close to me who could have taught me how to handle my money. I could have avoided a lot of things that make me feel bad about myself."

He said that Wrong Side of the Road is a good idea and that he wishes campaigns like this had been around when he was playing soccer because it would have helped him a lot. The former striker for African Wanderers was in three wrecks, and none of his cars could be fixed.

"I thank God that I'm still alive to tell my story and save other people. Because I drank a lot, I had been through a lot of bad things. I lost everything, so it's time for me to start over."

Phumlani says that people hide behind drugs and alcohol because they don't talk about their problems or don't have good role models in their lives. He finally got himself together after his family died.

"When you have money and can live the way you want to, it doesn't bother you if people leave you because you think you have everything you need. My wife of eight years left me because I drank too much. She couldn't stand how much I drank, so she left. I didn't care because I had everything I wanted, including other girlfriends and the best cars. My life was great, but when I ran out of money, everything changed.

Phumlani says that things went downhill when he hit rock bottom and became suicidal. He once took a gun and tried to kill himself because accidents weren't killing him.

"It got to the point where people in my community made fun of me because I had lost my way. I was the only person to blame for the bad choices I made. I don't want the new generation of football players to make the same mistake."

Junior Khanye, a former player for Kaizer Chiefs, has been on the wrong side of the road before. He leads the Wrong Side of the Road platform with a series of videos about the time he drove drunk. Junior, who has been in 15 car accidents, was on his way to becoming a great person when his career went off the rails.

"I hit four cars head-on. Two cars couldn't be fixed, and I had to fix the other two. I lost the car and the house I had at the time, which was worth R2 million. What makes me feel worse is that I hurt other people. One driver was in a coma for three days after the accident, and others were hurt very badly. "It's too bad," he says.

He tells Drum that he can't talk about his life in detail because he is writing a book and has signed a non-disclosure agreement with the publisher. However, he is happy to be a part of the campaign to save lives.

Desiree Ellis, who used to play for the Banyana Banyana team and is now their coach, says she has seen firsthand how drinking and drug use have hurt her community and others around the country.

"You see police pulling over cars with cooler bags full of drinks that are kept cold by ice. It's risky because you might find that the drivers are drinking, which puts their lives and the lives of others at risk. We need to change our minds and how we act, and we should always drive dry," she says.

Hlompho Kekana says it makes him sad that, during his more than 20-year career in the PSL, he has seen many footballers he respected die in car accidents. People know him as a responsible person.

"I know that football is a very short career that can end at any time because of an injury. But it's a sad story about South Africa that so many players have had their careers cut short or died too soon because they drank too much, he says.

Wrong Side of the Road was made in collaboration with the United Nations Institute for Training and Research (UNITAR). The project was funded by Diageo South Africa, which owns several spirits brands, including Johnnie Walker, Tanqueray, Ciroc, Smirnoff, and Captain Morgan.

Sibani Mngadi, who is in charge of Corporate Relations at Diageo SA, says that the company is taking the "Wrong Side of the Road" campaign to trendy alcohol stores like Konka on purpose because they want the message to reach as many people as possible.

"This project is part of Diageo's global plan to change the way at least 5 million people feel about drinking and driving by 2030.

As the world's largest company that makes and sells alcoholic drinks, Sibani says, "It's our job to make and use prevention tools to help save lives, working with partners like liquor stores."

How to take care of long hair