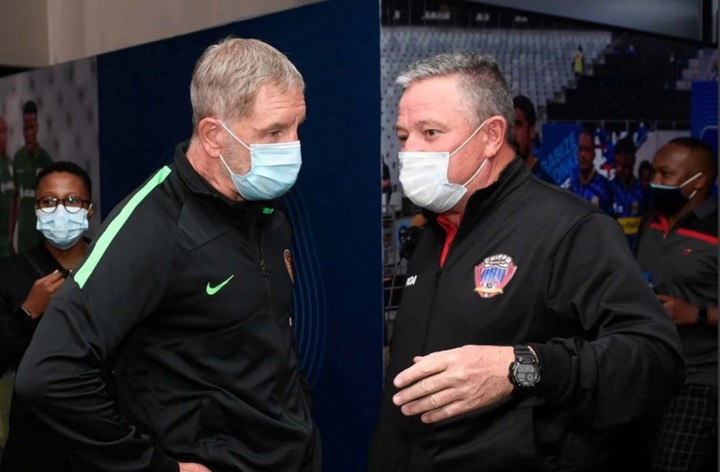 Stuart Baxter's predecessor, according to the ex-Bafana Bafana defender, did not have a fair chance at Amakhosi.

Former Mamelodi Sundowns centre-back Matthew Booth believes Gavin Hunt was not given enough chances to work with the Kaizer Chiefs squad during his tenure there.

Hunt was hired by the Chiefs in September 2020 and sacked eight months later.

He'd arrived at Naturena to find a club that had been banned from transferring players by Fifa.

That was the last time Amakhosi won a trophy, but Hunt struggled domestically, while Chiefs had a strong showing in the Caf Champions League.

"I was disappointed that Gavin Hunt was not given the chance to use the players. "I understand the fans' and owners' need for results," Booth said to GOAL.

"That's football, that's life." But I doubt they could find a better man than Stuart Baxter, who has already been successful with the team. After a six-season drought, they'll be keen for some silverware. For a club of their caliber, that is unheard of."

The Chiefs haven't won a trophy since winning the Premier Soccer League title in 2015, which they earned under Baxter's first spell at Naturena.

With his return, Chiefs have moved into second place in the PSL rankings, eight points behind leaders Sundowns.

The combination of Khama Billiat and Keagan Dolly seemed to have fueled Chiefs' ambitions to win the league.

"And the pressure from their followers puts them under a lot of stress," Booth added.

"I enjoy how Dolly has bounced back so well after a stumbling start to the season. That demonstrates the player's strong mentality, as he still has a lot to contribute.

"The fact that he's worked so well with [Khama] Billiat and [Bernard] Parker has been a huge plus for the Chiefs because it's taken a lot of burden off the defense."

"Baxter recognized that his centre-back combination was their Achilles' heel last season, so he has gone for a three-man defensive midfield at times, with Njabulo Ngcobo, Cole Alexander, and [Phathutshedzo Nange], who is quite defensive in quality or by nature." That's relieved a lot of strain from his back four."

As they try to keep up with Sundowns, Chiefs are prepared to host a difficult Cape Town City on Saturday.