LATEST| Capetown city have confirmed the signing of a star from Marizburg United, see his name below

By Amarie (self media writer) | 1 year ago 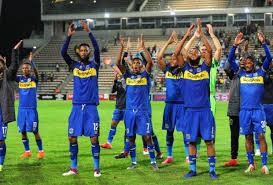 All clubs are busy signing new players, extending contracts and expelling other players. They are doing their best to strengthen their clubs. They are preparing for the 2021-2022 season.

Bongani Mpandle is 28 years old. He made 32 appearances during his 5 year deal with his former club. He is expected to serve as Keet's understudy, with the duo. Following the move of Peter Leeuwenburgh's move to FC Groningen, they will form a new look in the goalkeeping department.

Facebook followers and football fans have reacted to the news. Some are not happy with the news, and they have shared their thoughts on social media.

One said that this is the worst signing ever, made by Cape town city. The angry Facebook follower said that Bongani costed Cape town city club so much, and they have made a wrong deal of signing him to the club. He added that he followed Bongani's games at Marizburg United, the follower is claiming that Bongani failed to establish himself at Marizburg United, and he is not welcoming Bongani at Capetown city club at all.

Another one said that Bongani is an average goalkeeper.

One said that he can not wait for this season to begin. Others are also congratulating Bongani for joining Capetown city club.

As a football follower, what do you think about the choice made by Capetown city? Do you think that that have made a right decision? Leave your thoughts below the comment section.

Where is Musa Khawula? Tweeps claims blogger is behind bars