Hunt was let go from Kaizer Chiefs in May of last year after a succession of unsuccessful matches, despite the fact that he had steered Amakhosi to the CAF Champions League semifinal. 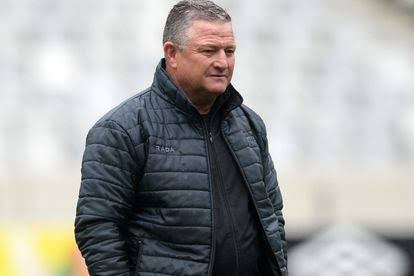 More well-known brands are reportedly connected to sundowns in a huge deal.

After a brief stint at Chippa United, Hunt is currently jobless. Hunt recently told Soccer Laduma that he is keeping his options open and would be eager to take on a new coaching challenge if the environment was appropriate.

Hunt, a four-time league champion as a coach, recently made the interesting comment on social media that he misses the feeling of being deeply engaged in the game. Hunt's close friend and fellow coach Pitso Mosimane had an interesting response.

Mosimane responded to Hunt's post about missing football by saying, "I have difficult to understand that you are yet to feel attached to a team after winning so many league and cup medals, plus Caf Champions League experience.

Hunt might not be unemployed for very much longer, it seems.

Following a board meeting, SuperSport United is anticipated to decide on a new head coach in the ensuing days. Andre Arendse took over as interim coach after Kaitano Tembo was fired in April. He is vying for a permanent appointment to the position.

Fadlu Davids, Gavin Hunt, Benni McCarthy, and Cavin Johnson are further coaches who have been linked to the position.

However, the immensely well-liked social media account UnplayableZA has recently claimed that SuperSport United is attempting to rehire Hunt as head coach. After his lengthy and mainly successful tenure at the club between 2007 and 2013, it might represent an extraordinary comeback.

HUNT RECENTLY TOOK AN "UPSKILLING" TRIP TO ENGLAND AND SPENT SOME TIME IN MANCHESTER CITY.

Phakaaathi recently said that he will conduct due diligence before accepting a new coaching position.

He is not pressing for a new position. A few clubs have approached him to inquire about his availability, but he is not overly interested. He seeks a team that will require him and allow him to bring the players he desires, according to a Phakaaathi source.

Hunt stated once more a few weeks ago that he didn't think it was necessary to promote his resume.

"I'm not sending my resume, no. What do you require a CV for if I went to the Bafana job three times for interviews? Must I send a CV if they either want me or don't want me? What is a CV for? Like a player, you go through a tryout and get a yes or no response," remarked Hunt.

It would be fascinating to watch whether Hunt decides to start pushing for a new employment after posting on social media that he is missing the game.