Points shared between Pirates and United.

By CornerSpot (self media writer) | 7 months ago

Ezimnyama ngenkhan Orlando Pirates failed to return back to winning form in the DStv Premiership following a goalless draw played against Fadlu Davids' former side Maritzburg United at the Harry Gwala Stadium. 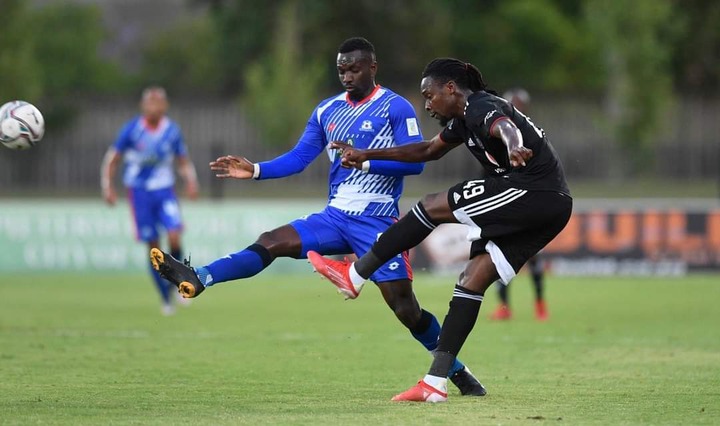 Linda Mntambo, Terrence Dzvukamanja and Bongani Sam were trusted to start for the visitors, while Travis Graham captained Maritzburg United on his return to the side.

There was noo dilly-dallying following kick-off as Orlando Pirates went on the prowl from a galloping header in the box by Olisah Ndah and Tshegofatso Mabasa’s close-range shot which Marcel Engelhardt saved to keep the scores level.

Engelhardt was not out of danger midway following the first half and got reduced to a low outstretched save from a snap shot on the edge of the area by Linda Mntambo as he looked to put his side on the driving seat.

The Soweto outfit should have left Engelhardt for dead shortly after the half-hour mark, but Dzvukamanja put Mntambo’s ball into the area wide of the mark with the defence in sixes and sevens failing to contain the former Bidvest Wits player.

The Team of Choice eagerly looked for a different second period, as Ernst Middendorp introduced Daylon Claasen in place of Riyaaz Ismail to bolster their attack as the intention was to collect maximum points.

It indeed structured Maritzburg United to more ventures into the Pirates third, with an attempt by Amadou Soukouna and thereafter Ryan Rae seeing a header from a ball into space travel wide of the goal.

Although, a set-back followed in the middle of the second half when a high-foot challenge from Brandon Theron on Thabang Monare saw the home side reduced to 10 men. Pirates desperately looked to make use of the one man advantage with the clock flowing by but just as in the first half were deprived by missed chances which then signalled a goalless outcome, points shared.

The Tough mammals that live throughout Sub-Saharan Africa

"Why So Many Sangomas?" -Mzansi Reacts As Debate Between Sangoma Zealots And Christians Intensifies

Somizi says he wants to settle dispute in the boxing ring