By Thee_big_news (self media writer) | 1 year ago 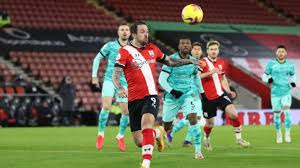 Liverpool suffered a shock defeat to Southampton on Monday night.

Liverpool were favourites to win the match but Southampton had other plans. Southampton took the lead in the second minute through a former Liverpool player Danny Ings who netted a superb goal after Liverpool gave away a free kick in a very dangerous position.

" The best situations we had where with radio having the ball at his feet" klopp said " for anyone to say he is a diver is the biggest joke. He had two situation where other teams would get a penalty"

"The handball, I don't know who will explain that to me in these situations we were unfortunate, I hear Manchester united had more penalties in two years I had in 5 and a half years , I have no idea if that's my fault or how it can happen"

Liverpool are now without a win in three game and a level in points with second place Manchester united who have played a game less.

Content created and supplied by: Thee_big_news (via Opera News )