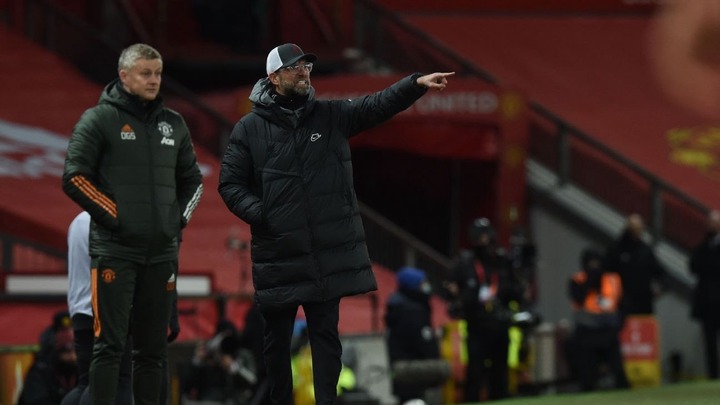 Klopp stated in January that United had "had more penalties in two years than I had in five-and-a-half years" after the referee failed to award a penalty during a defeat at Southampton.

United was granted 11 Premier League penalties last season, compared to six for Liverpool, but both teams have been awarded one penalty in the league since the start of the 2021-22 season in August.

However, in his pre-match press conference on Friday, Klopp reiterated his conviction that United is granted an excessive number of penalties in compared to Liverpool.

"I don't have anything to say about it," Klopp added, "but I think between what Ole said and what I said, they had five penalties and we had two."

“However, we all know that stuff like that cannot sway the referees. United, on the other hand, had an unusually high number of penalties.

"They're pretty good; they go into the box and deal with these types of scenarios." But we have them as well, and we haven't received anywhere near the same number of penalties. But facts are facts, and the job is done. "I don't have anything further to say about it."

Thiago Alcantara, a midfielder for Liverpool, has been ruled out due to injury. Curtis Jones, on the other hand, has returned to training and will be in the squad.

Despite the fact that former United player Paul Scholes indicated on Wednesday that Klopp will be "rubbing his hands" at the thought of meeting Solskjaer's side after the 3-2 Champions League win over Atalanta, Klopp stated that Sunday's encounter will be a test of his team's qualities.

Klopp continued, "I didn't rub my hands for a single second." "It was completely unnecessary."

"Atalanta caused United some problems in the first half, but United had three clear chances, and the second half was a pure power display of United's quality."

"I wasn't rubbing my hands because they can cause problems." I prepare my team for a difficult game against a formidable foe.

"We're all aware of how football works. United is a huge game, and we know they can do fantastic things, but we try to concentrate on ourselves.”