Barcelona star Aubameyang gets into the history books | Find out how

We bring you the latest news on Gabon international Pierre-Emerick Aubameyang, who has only been at Camp Nou for a short time but has already achieved a significant milestone. The former Arsenal striker is just scoring for the joy of it, but he has proven to be a wonderful addition for Barcelona as he continues to deliver.

After scoring against Osasuna at Camp Nou, the ex-Arsenal striker now finds himself among the club's legends.

Pierre-Emerick Aubameyang has joined the likes of Cristiano Ronaldo, Zlatan Ibrahimovic, and Johan Cruyff at Barcelona after scoring a goal against Osasuna on Sunday.

On Sunday, Aubameyang scored Barca's third goal of the first half, with Ferran Torres scoring twice in the first 45 minutes at Camp Nou.

With his goal, Aubameyang cemented his place among Barcelona's all-time greats just six La Liga games into his career.

What was Aubameyang's contribution?

With this goal, the ex-Arsenal striker has five goals in his first six league appearances for Barca, having joined the club in January.

Aubameyang has had a fantastic start to his Barca career, scoring three goals against Valencia and one against Athletic Club, as well as scoring in the club's Europa League victory over Napoli. 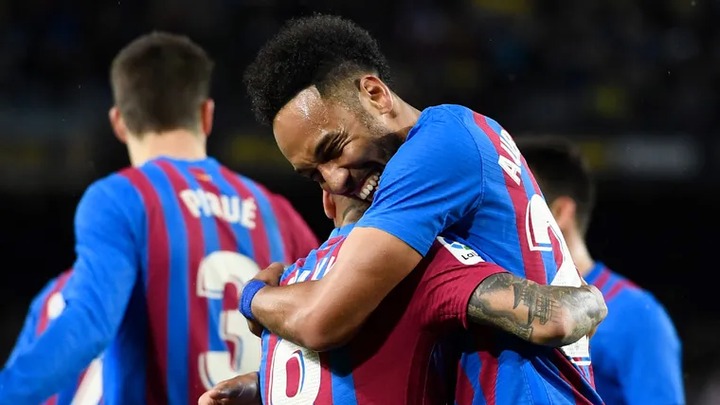 Only a few club legends have scored league goals in their first six appearances.

He joins Ibrahimovic, Ronaldo, Cruyff, Romario, Ronald Koeman, Hans Krankl, and Sandor Kocsis as the only players at Barca to score six goals in six games.

As Arsenal fan I'm happy for him that he is doing well at Barcelona. And of course, Arsenal are going better without him. So it is a win-win situation.

What do you think about Aubameyang's recent performance at Barcelona?