The real story behind the controversial R15 million stadium

South Africans woke up with mixed reactions after a sports field was reported to have cost the Enoch Mgijima municipality R15 million.

The residents claim that more than R7m budgeted for the facility, which made headlines this week, had not been accounted for.

They also felt that there was no value for money in the R15m paid for the newly unveiled facility, whose official launch on Monday sent shock waves across SA, due to its below-par standard.

Zolile Xalisa, of the Independent Komani Residents Association, yesterday called on law enforcement agencies to look at investigating the municipality.

Xalisa revealed that a tender award document, dating back to August 2018, showed that the construction of the fields had been awarded to Thalami Construction at a cost of R22m. 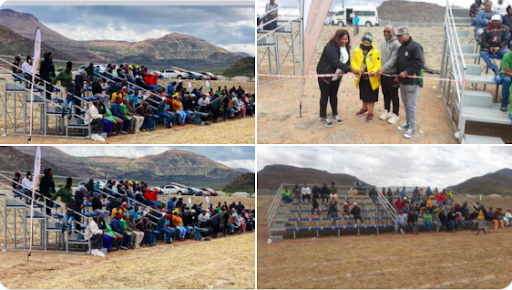 On Monday, the municipality, while unveiling the facility, announced that R15m had been used for the construction of the sports fields on the once vacant piece of land.

“The money that was supposed to be used was R22m as budgeted for, hence we want law enforcement to investigate everyone who was involved in the construction of the facility. If they are accounting for R15m, then where is the other budgeted R7m?” He said even the R15m used for the facility was not equivalent to what was on the ground.

All hell broke loose on Monday when the municipality posted on Facebook about the opening of the Lesseyton facility and the amount paid.

This received widespread condemnation, from many quarters, with people saying what was projected in the pictures did not deserve a R15m price tag. They accused council of taking people for a ride.

A group of independent councillor candidates in the area said they would assess the facility today.

Nqatha said he was concerned with reports about the project, which he said had caused “a national media storm on social media platforms”.

Healthiest Vegetable in the World and We Have Completely Forgotten it